Galerkin Alexander Mikhailovich (1916-1988) - graphic artist, Member of the Union of Artists of the USSR. Alexander Mikhailovich was born in Polotsk (Belarus) on July 2, 1916. Came to Leningrad in 1930. Since 1932 he studied at the studio of the artist Alexei Petrovich Eisner, a student of I.E. Repin. For two years he worked in the mosaic workshop of the Academy of Arts (master of the 3rd category). In 1941 he graduated from the 1st Leningrad Art School (now named after N. Roerich). Since the beginning of World War II, Alexander Galerkin graduated from short-term courses at the Military Engineering School. A.A. Zhdanov and was sent to the reserve of the Siberian Military District, then to the reserve of the Bryansk Front. Since May 1942, Galerkin was in the active army, in the 535th Army Engineering Battalion of the 61st Army of the Bryansk Front. Commander of a sapper platoon with units of the Bryansk, then the 1st Belorussian fronts, he marched to Poland through the south of Belarus. During the war, when crossing the Dnieper in 1943, he was twice wounded. In 1944 he was transferred to the disposal of the Political Department of the Front in a creative group of artists to paint pictures for the exhibition «The Combat Path of the 1st Belorussian Front». During the war, he created many front-line sketches and portraits of soldiers and commanders who distinguished themselves in battles. As an artist of the Political Department of the Front, he painted a number of paintings: «The crossing of sappers across the Volga» (1944), «Interrogation of Paulus» (1945). Canvas «Liberation of Ukrainian girls from German captivity» (1944 - 1945), a number of drawings are in the Central Museum of the Armed Forces of the USSR (Museum of the Red Army), Moscow.

After demobilization in January 1946 in Potsdam, he returned to Leningrad, where he immediately began work in the Leningrad partnership Lenizo (cooperative partnership of Leningrad artists). In 1954, after the reorganization of Lenizo, he transferred to the Leningrad branch of the Art Fund of the RSFSR, where he remained an artist for many years. A year later he became a member of the Leningrad organization of the Union of Soviet Artists. Famous graphic artists G.S. Vereisky and A.I. Kharshak. From that time on, his active creative activity began. One of the main themes of Alexander Mikhailovich's work is portraits of actors and cultural figures. 1950s - 1970s Galerkin painted a lot for the magazines «Koster» (1956), «Neva» (1957 - 1962), the newspaper «Leningradskaya Pravda» and other publications. Cooperation with the Theatr Life magazine was especially fruitful.

While working on portraits of actors, Galerkin made sketches in the theater, during the performance, which created a lively and direct impression of nature. Such a famous art critic as M.G. Etkind, who wrote: «... Accurate and sharp drawings by A.M. Galerkina tell us not only about acting successes, about the complex and subtle experiences of a person on stage. Behind confidently free strokes, capturing a familiar stage image, it is easy to catch the atmosphere of a whole stage episode, and sometimes the breath of the whole performance». The statement of theater experts was especially significant. So the Moscow theater critic R.M. Benyash wrote that «... in Galerkin's drawings there is little picturesque, but there is life ... Look at any theatrical portrait of Galerkin, you will see both an apt description of this hero, and the personality of the actor emerging through it».

Galerkin exhibited portraits of artists, workers, athletes, writers, art workers at various exhibitions, starting from 1955: Leningrad, zonal, all-Union, republican. «The work of a draftsman in a rapidly changing environment, wrote art critic P.Ye. Kornilov about the works of Galerkin, is an extremely difficult work. It allows you to bring to us and preserve for future generations what could have been irretrievably lost. For this I would like to say a big thank you to the artist!»

Gallery of patterns
It is sold for: 700 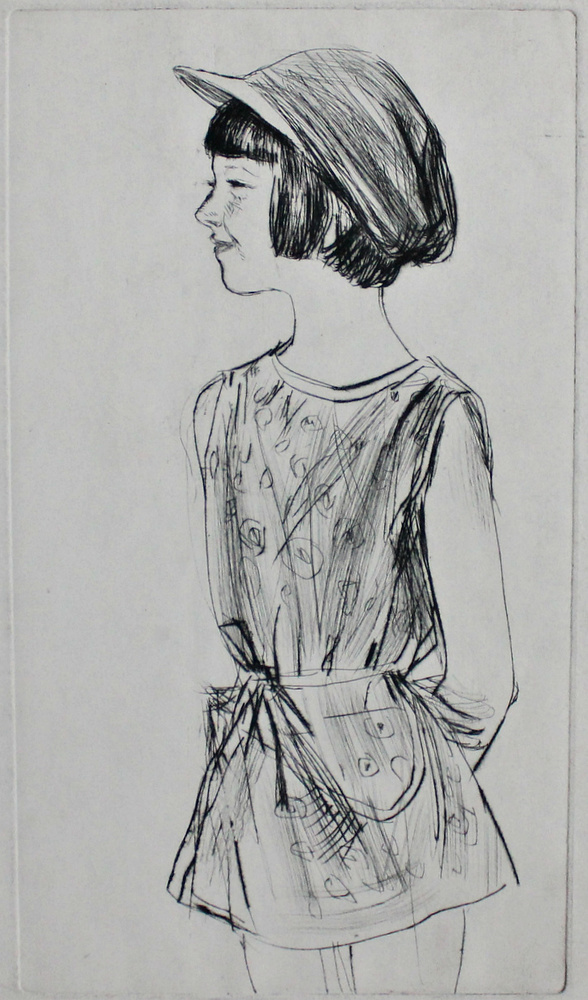