Aslamazyan Mariam Arshakovna (1907-2006) - Soviet Armenian painter, graphic artist. People's Artist of the USSR (1990), People's Artist of the Armenian SSR (1965). Member of the Union of Artists of the USSR since 1939.
Mariam Arshakovna was born in the village of Bash-Shirak, Kars region on 03.12.1907. She received her secondary education in Alexandropol (Gyumri). She graduated from the Yerevan Art-Industrial College (1929, studied under S. Arakelyan and S. Aghajanyan). She studied at the Higher Artistic and Technical Institute (1928-1930), her teachers in Moscow were N. Udaltsova and A. Drevin, V. Favorsky and A. Goncharov, S. Gerasimov and M. Rodionov. But most of all she remembered Konstantin Nikolaevich Istomin. In 1930 she transferred to the Leningrad Institute of Proletarian Fine Arts (St. Petersburg Academy of Arts) (studied under K.S. Petrov-Vodkin). In the same place, from 1932 to 1934, she studied in graduate school (with Professor A.I.Savinov).

Representative of the Armenian school of decorative planar still life («Armenian still life», 1955, «Blooming red cactus», 1957, both in the Tretyakov Gallery), author of thematic paintings («Return of the Hero», 1943, «Song of the Hero», 1944, «Mother -heroine», 1949, - all in the Art Gallery of Armenia, Yerevan), portraits. Aslamazyan's pre-war work is diverse in genres: landscape «Autumn Mulberry Trees» (1939), portrait «I and Yeran in the Mirror» (1939), still life «Peaches» (1940), interior «In the Studio of Artist V. Lebedev» (1940). Unfortunately, most of the pre-war works were lost during the Leningrad blockade. In wartime, Aslamazyan pays much attention to visual agitation. The artist herself pasted her military posters («We will replace those who went to the front», «We will take revenge», «We will restore», «For the Motherland in a decisive battle» and others) on the streets of military Leningrad. Among the paintings about the war, three works that differ in plot, but united by a common theme, stand out. These are The Return of the Hero (1943), The Song of the Hero (1944) and The Wedding of the Hero (1945). They trace the fate of an unnamed soldier. With their optimism and a sense of the joy of being, these paintings oppose the very spirit of war. The cycle dedicated to the image of the hero became a milestone in the work of M. A. Aslamazyan. It summed up the past, determined the ways of further development, found a folk-spirit form of self-expression. Aslamazyan proved herself not only as a master of intimate portraiture, lyrical landscape and still life, but also opened another facet of her talent - the ability to create large monumental and decorative compositions. Work in the field of monumental painting lasted, with various interruptions, from 1938 to 1955. During this time, Mariam Arshakovna, together with her sister, artist Yeranuhi Aslamazyan, decorated with huge panels the pavilion of the Armenian SSR at the All-Union Agricultural Exhibition, the Museum of Geosciences of Moscow State University and the cafe «Ararat» in Moscow. In the postwar years, M. A. Aslamazyan became more and more interested in still life: «Armenian Still Life» (1955) and in «Blooming Red Cactus» (1957). In the works of this period, Aslamazyan's connection with the Saryan school is especially noticeable. Composition, coloristic system — all this is close to Saryanov's still lifes.

Flowers occupy a special place in the still life work of M. A, Aslamazyan. She writes them all her life. Aslamazyan endows his flowers with breath, light, sun, fills them with life, incessant movement. The decorativeness of these canvases becomes a real property of nature. And in the moments of the life of flowers captured by her there is an image of all nature, understood by the artist as a harmony of color (Flowers to Fallen Heroes, 1973). The Mountain Symphony of Armenia (1976) is a peculiar result of a series of Hankavan still lifes. The huge canvas, as if striving to absorb all the variety of blooming spring mountains, amazes with the decorativeness of a truly monumental scale. Its color rhythm, according to the composer A. Khachaturian, with its polyphonic complexity resembles a piece of music, in which the main theme is repeatedly varied and repeated.

Numerous travels to the countries of Africa and Asia (M. Aslamazyan visited India, China, Japan, Egypt, the Ivory Coast, Madagascar, Congo and other countries) constitute an integral part of creativity. India Aslamazyan is a country of ordinary people, painstaking work and ancient customs. Madras Dancer (1967), Delhi Student (1970), Craftswoman (1971). One of the pages of the creative biography of Mariam Arshakovna Aslamazyan is also connected with Africa. The trips she made in the 60s opened a completely different world for the artist. She is interested in everything, but especially the colors of Egypt, the color change depending on the time of day. In its tempera sheets, a gentle morning («Village Aswan at dawn», 1967) gradually turns into a hot scorching afternoon («Village Aswan», 1968), which gives way to evening with its light and shadow contrasts («Street in Luxor», 1968). of the characteristic features of Mariam Aslamazyan's work is the versatility of her work.

The design of theatrical performances and circus performances was not an accidental episode of her biography. The craving for monumental decorativeness, love for large compositions, which manifested itself already in the 40s, led her to design art. In 1959, Aslamazyan designed the play «Fire of Your Soul» based on the play by A. Araksmanyan at the Lenin Komsomol Theater. A year later, Mariam Aslamazyan was invited to the circus to decorate the performance (the arena and the costumes of the artists). In 1958 M. Aslamazyan discovered ceramics. Her ceramics are both decorative and graphic. The painting techniques of Mariam Aslamazyan are concentrated here, the essence of her colorful palette is expressed. The works of M. Aslamazyan are in 40 former Soviet and foreign museums.

Major exhibitions with the participation of M. Aslamazyan: 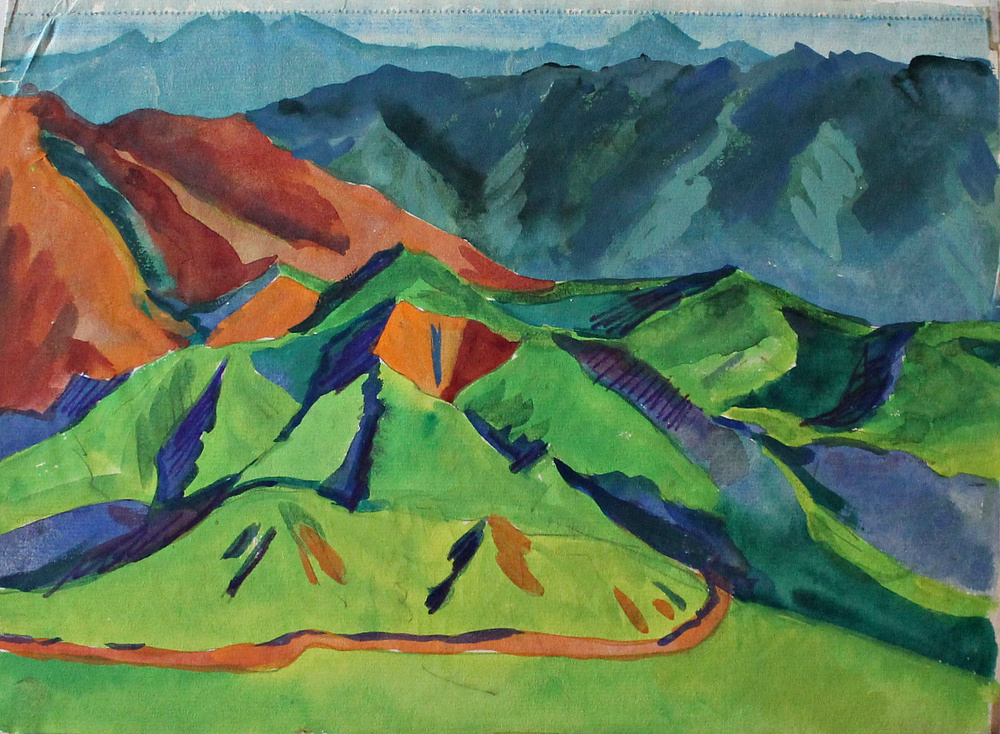