Belyaev Nikolai Yakovlevich (1916-2004) - painter, graphic artist, member of the Union of Artists of the USSR (1945), Honored Artist of the RSFSR (1978). Nikolai Yakovlevich was born on May 28, 1916 in the city of Tsaritsyn in the family of an employee, lived in Sergiev Posad (Zagorsk). From childhood, he became interested in drawing, attended the private studio of the artist Durnao. In 1933, the family moved to the town of Zagorsk (now Sergiev Posad) near Moscow.
In the period 1936-1939 he studied at the Moscow Regional Art School «In Memory of 1905». Member of the Studio of Military Artists. M.B. Grekov (1939-1942).

Since the end of 1943 he has been a permanent participant in artists' exhibitions. During the period of his creative career, 12 personal exhibitions took place. In his work, he often turned to the image of Sergiev Posad, in the legacy there are many episodes of the history of the city: «Zagorsk in 1943», «Winter from the windows of the workshop», «Autumn in Sergiev Posad», «Zagorsk. Ravine lane» and «Spring rain in Zagorsk».

The figurative language of N.Ya.Belyaev was guided by the traditions of such artists as K.F.Yuon, V.N.Baksheev, P.P. Sokolov-Skalya, based on the heritage of the «Itinerants» and artists of the Academy of Arts. In the early period of his creative activity, thematic searches, a desire for a variety of compositional solutions, and manner of performance are noticeable. Paintings dedicated to children and childhood were the main content of painting in the late 1940s - early 1950s. The canvas «Soviet guys» was purchased for the collection of the Russian Museum. In the 1950-1960s. addresses Lenin's themes, solving it in terms of revealing the human personality through a portrait image and through a landscape. In the paintings «Conversation», «Children in Gorki» and others, the peculiarity of many of his thematic works was manifested - the genre scene is not conceived by the author outside the landscape. Over the decades of his creative life, he turned to different genres. But, perhaps, in the depiction of nature, the attractiveness of his art is most fully felt. The desire to comprehend the secrets of landscape painting was formed as a student under the influence of P.I. Petrovichev, a talented Russian landscape painter. Often the artist turns to the image of the Lavra, conveying its majestic ensemble in the shine of the colors of summer and, as it were, covered with a mysterious silvery veil of twilight autumn-winter days. Bays of watercolors lie flat and thin on the sheet, acquiring density and distinctness in the silhouette lines. To make the drawing complete, the artist goes through the main details with a brush, combining the techniques of working «raw» with a light registration in several layers.

He left behind a magnificent legacy of watercolors of the highest level, which is a rarity for artists of the Soviet period. The theme of Central Asia was widely disclosed in his works. Works are in the State Russian Museum, Sergiev Posad State Historical and Art Museum-Reserve, museums of fine arts in Sofia and Pleven, as well as in museums and private collections in Russia, the CIS countries and Europe. 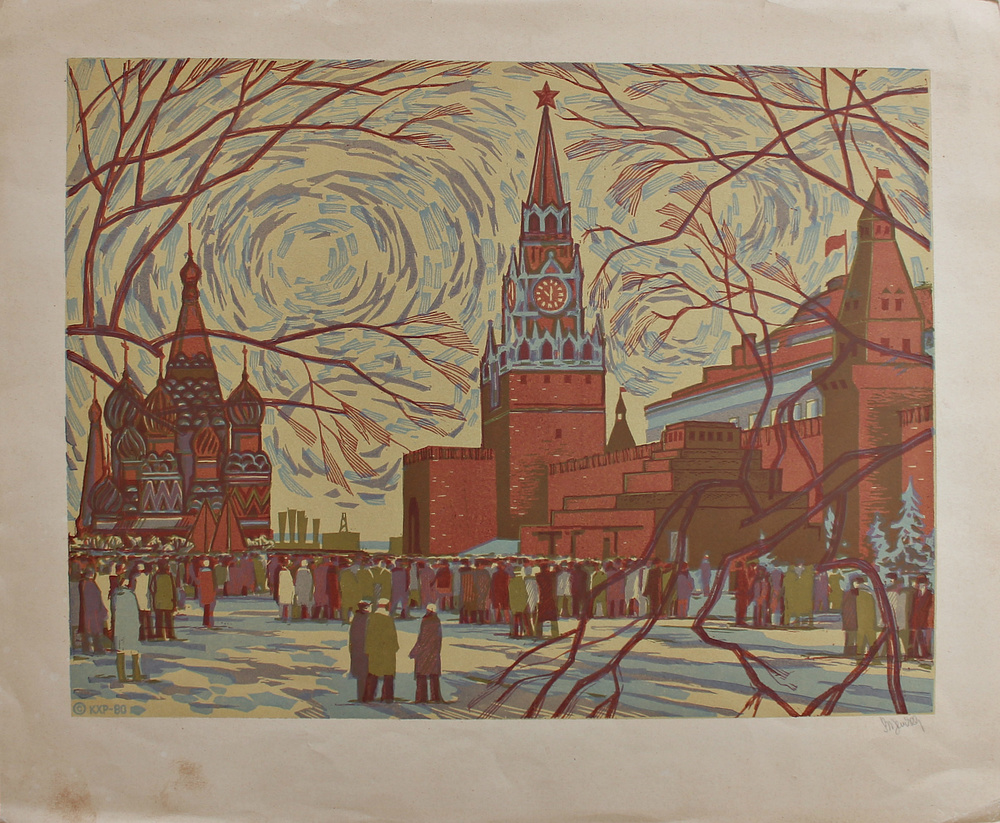