Alexandra Feliksovna Bill March 5 (18), 1914 (Tomsk) - February 16, 1992 (Moscow), schedule. In 1939, Bill graduated from the Moscow Institute of Fine Arts. She was lucky to learn from talented teachers. Painting was taught by K. Istomin and A. Goncharov, drawing - P. Pavlinov and M. Rodionov. Especially memorable for future schedules were classes with V. Favorsky. They went beyond the composition course, which he taught at the institute. Favorsky tried to form a deep artistic worldview among his students, to instill in them an honest, sincere and strict attitude to art, and a high demand on himself. The school, held by an outstanding master, largely determined the further path of the creative development of the artist and many of her study friends, including V. Goryaev, A. Livanov (husband A. Bill), L. Ilyina, V. Domogatsky, A. Zhurov .

Upon graduation, Bill performs his first work in a book illustration for the Detgiz Publishing House. But art was interrupted by the war.

The active formation of the artist’s creative personality falls on the first post-war decades. Since 1946, the Bill has been constantly acting as an illustrator of the book. Among her first serious works - woodcuts to the play by A. N. Ostrovsky «The Poor Bride» (1946), to the works of A. S. Pushkin (1949), M. Rylsky (1950), M. Yu. Lermontov (1952), A Mitskevich (1955) and other authors. Since 1951, her works are regularly exhibited at all-Union exhibitions.

In each new work of Bill, her graphic skill was improved more and more, there was a desire not only to «illustrate» plot conflicts, but to express the very spirit of a literary work.

Organically, the Bill toward the work of the illustrator was influenced by the principles of book decoration, learned from V. Tabor. The appeal to them with the greatest force was determined in the Soviet book graphics at the turn of the 1950s and 60s.

In the illustrations made in the 1960s, the artist already appears as a mature master, confidently mastering the technique, form, composition. The engravings for Stendhal's «Parma Monastery» (1959), «Tales of Italy» by M. Gorky (1964), and the «Lyrics» of S. Marshak (1966) are marked by the depth of imaginative solutions and the integrity of their execution. Along with woodcuts and linocuts in the illustrations of these years, A. Bill turns to the watercolor and ink technique (as, for example, in the book by S. Quasimodo «My Country is Italy»), actively introduces color.

The undoubted success of A. Bill was the work on the design of the poem by R. Rozhdestvensky «Requiem» (1970). The book is original in layout, and although its format is small, the illustrations for it are full of organic monumentality, vivid and convincing expression of images.

Bill has been engaging in easel engraving since the early 1960s. In large format sheets, made mainly in the technique of linocut, and sometimes woodcut, the journalistic talent of the artist is clearly revealed. The names of these sheets themselves - «Song of the World» (1964), «No to War!», «Africa Fights» (1970-1975) - testify to the civic orientation of these works. Bill's journalistic sheets are characterized by a generalized, often expressive imaginative solution, clearly visible both in engravings of the Requiem series, and in the sheets of the triptych «For Peace!», And in the original composition «In Memory of the Slovak National Uprising» (1973-1974), awarded the Grand - at the Fifth International Biennale of woodcuts in Vanska Wistrica (Czechoslovakia, 1974). The rhythmic and color scheme, the monumentality of the performance bring notes of heroic-dramatic sound into the figurative system of these works, which are developing in a passionate appeal for the fight against war.

The journalistic theme is central, but not the only one in the easel work of A. Bill. Among her linocuts are the portrait series «Russian Women» (1974), the genre series «Bathing» (1975-1976), and a number of color prints of memoirs about trips around the country and abroad.

The artist constantly turns to watercolors and pencil drawings and creates sheets that conquer with technical relaxedness, immediacy of vision. They are simultaneously very collected, integral in composition. Everything in them is imbued with the quivering life of space, the internal mobility of seemingly animated forms. This is true for nature paintings captured by the artist, and for architectural and even industrial landscapes.

Color drawings can be called the undoubted success of the artist. They vividly demonstrate the originality of her coloristic vision and an original approach to solving technical problems. Although the palette of these drawings is often built on two or three colors, they with amazing fullness convey the richness of the colors of the world. The beginning of this attitude to color was laid by Bill while still studying with K. Istomin.

Bill's work in easel and book graphics has been repeatedly praised at all-Union and international competitions, awarded honorary diplomas of the Union of Artists and the USSR Academy of Arts. Among them, one of the latest works by A. Bill is the masterfully designed volume «Poets of the Pushkin Pore» (1986). Among the artist’s new works are illustrations for a two-volume book of poems about the Great Patriotic War (1985), a cycle of large two-color woodcuts based on military poetry, a series of colored linocuts “In Tajikistan” and drawings «In the Pushkin Nature Reserve». 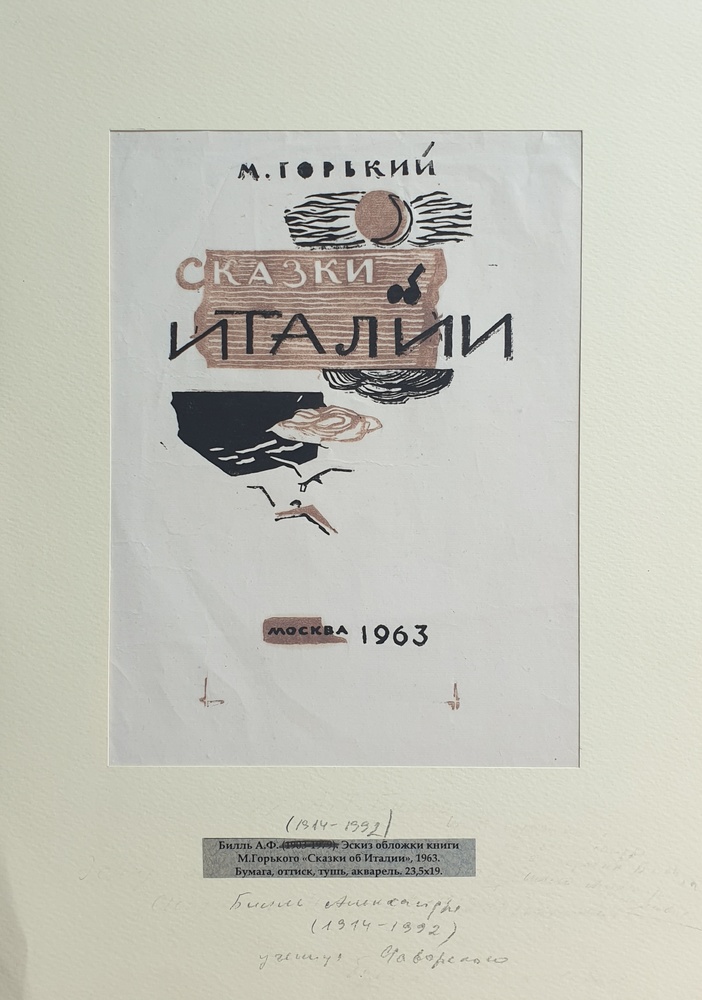 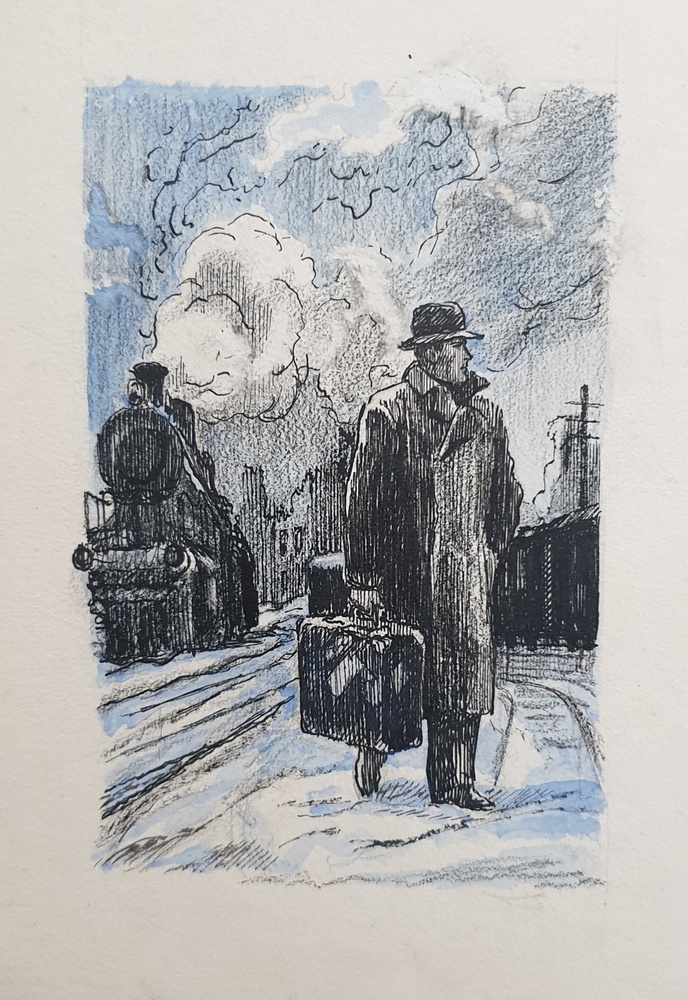 lot 73. «Sketch of an illustration for the book by S. Mstislavsky «Rook Bird of Spring»» 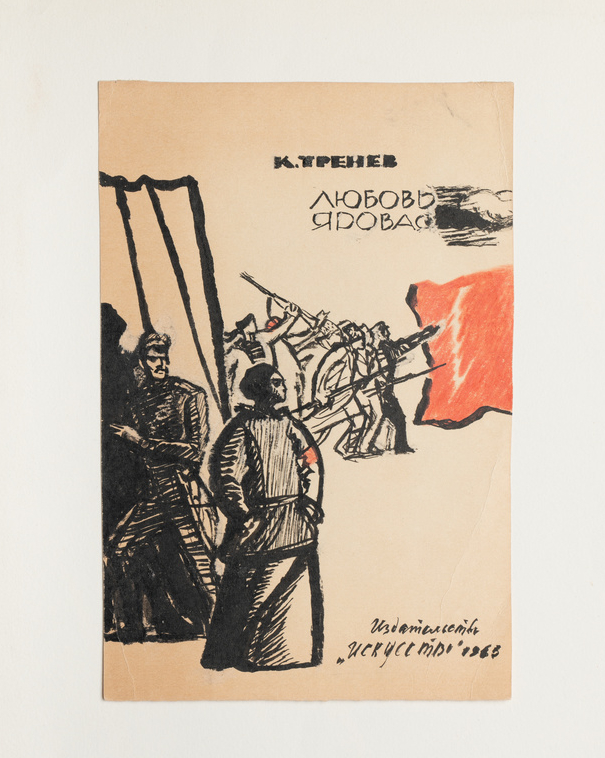