Mstislav Valerianovich Dobuzhinskis (lit. Mstislavas Dobužinskis; August 2 [14], 1875, Novgorod, Russian Empire - November 20, 1957, New York, USA) - Russian and Lithuanian artist, master of urban landscape, member of the creative association «World of Art», artistic critic, memoirist. Born August 2 (14), 1875 in Novgorod. Son of Lieutenant General Valerian Petrovich Dobuzhinsky. Originally from an old Lithuanian family. After the birth of their son, the parents separated when the mother, the artist, the singer left the family. The general was no stranger to art, loved theater and music, attended exhibitions and painted himself from time to time. The father took his son for upbringing, who divided his entire childhood between his loving parents, alternately living with one or the other. As a child, he lived with his father for three years in Chisinau, where he entered the second grade of the 2nd city gymnasium. At the age of 9 he first came to Vilnius. In 1889-1895 he studied at the Vilna 2nd gymnasium. Then he studied in St. Petersburg at the Imperial School of the Society for the Encouragement of Arts (1885-1887), at the school of Anton Azhbe (Munich, 1899-1901) and Sh. Hollosha (Nagybanya, Hungary). In 1901 he studied engraving under the guidance of Vasily Mate. Participated in exhibitions since 1902. Member of the World of Art association. From 1906 he taught at the art school-studio of E. N. Zvantseva in St. Petersburg. He was one of the first to appreciate the talent of the Lithuanian artist M. K. Čiurlionis.

In the first years of Soviet power, the artist worked actively, participating in the design of street festivities in Petrograd and holding a number of responsible positions: a member of the Commission for Arts under the Council of Workers 'and Soldiers' Deputies, a member of the State Workshops of Decorative Arts, and secretary of the Special Conference for Arts. In October 1918 he was elected as a scholarly curator of the Hermitage. Dobuzhinsky takes part in the organization of the Vitebsk Artistic and Practical Institute, the Vitebsk Art Museum, the Museum of Icons of Old Vitebsk, in the organization of the Petrograd House of Arts, becomes the head of the artistic part of the Bolshoi Opera House. In 1923-1924 he travels a lot, visits Kaunas, Berlin, Paris, Amsterdam, Copenhagen. His personal exhibitions are taking place in Paris.

In 1924, with the assistance of Y. Baltrushaitis, the artist accepted Lithuanian citizenship and left the USSR forever.

For some time he lives in Riga, in 1926 he moved to Paris, where from 1926 to 1929 he worked on the design of performances in the theater of N. F. Baliev «The Bat», on the decoration of the film «Fertility» based on the novel by E. Zola «Earth» (For the Parisian firm «Central Cinema»), participates in the organization of the exhibition «The World of Art» (1927), teaches at the Paris School of Decorative Arts, founded by Globa N. V. From the publishing house «Pleiade  «receives an offer to repeat» White Nights» in lithography , but the project never came to fruition. In 1929, the album Biarritz, Schibert. Golf and Villas ”(Biarritz, Chiberta. Le golf les villas), for which the artist made the cover, flyleaf, two illustrations, five vignettes and twenty graphic frames. At the suggestion of Vl. Narbuta, for the publishing house «Land and Factory» creates illustrations for the book «Three Fat Men» by Yu. Olesha (1928).

In 1929-1935 he lives in Lithuania, in Kaunas. He teaches at the Kaunas Art School, and in January 1931 he became the chief designer of the Lithuanian State Theater and created scenography for 38 plays. There he also opened a private school of painting (1930-1933). In 1938 he received an invitation from M. A. Chekhov to take part in the production of the play «Possessed» based on the novel «Demons» by F. M. Dostoevsky, on which he was working in England in the spring of 1939. In July of the same year, to continue working at the Studio Theater MA Chekhova Dobuzhinsky leaves for the USA. Lives in New York. Designs performances for the Metropolitan Opera, other theaters in America and Europe, works for cinematography. Designs books: «Poems» by M. Yu. Lermontov (1941, not published), «The Steel Flea» by N. S. Leskov (1943), «Count Nulin» by A. S. Pushkin (1943, not published) , «Night tavern» by I. A. Bunin (1946), «Word about Igor's regiment» (1950). Creates a cycle of imaginary landscapes of besieged Leningrad (1943).

The artist spends the last years of his life in Europe; lives for a long time in Paris, Rome, London, travels in Italy. Shortly before his death, he returned to the United States. Until the end of his life, Mstislav Valerianovich remained in the United States, communicating mainly with Russian emigrants. Mstislav Dobuzhinsky gave his last interview two days before his death, November 19, 1957, to Radio Liberty correspondent Boris Orshansky. He died on November 20, 1957 in New York at the house of his youngest son Vsevolod. Buried in the Sainte-Genevieve-des-Bois cemetery in Paris. 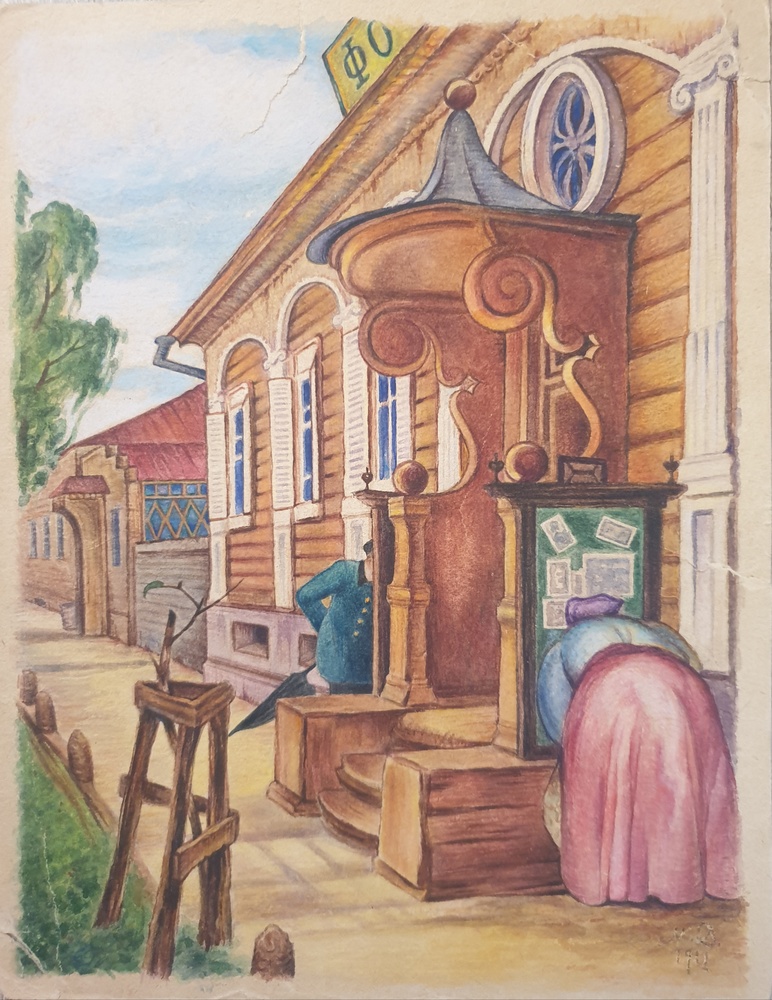 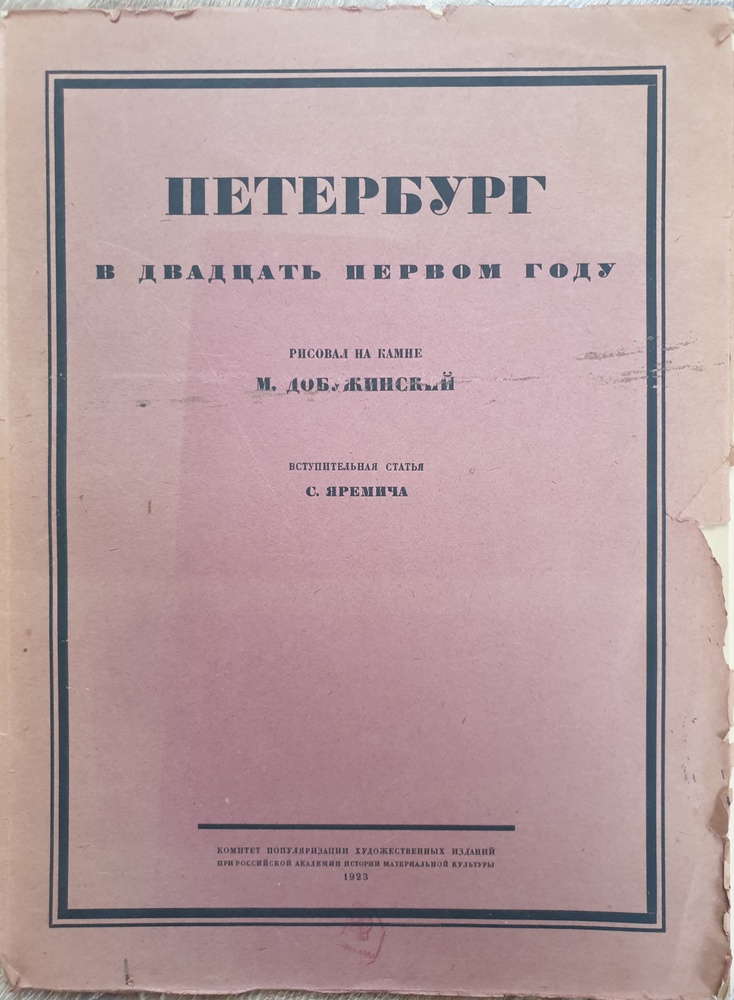 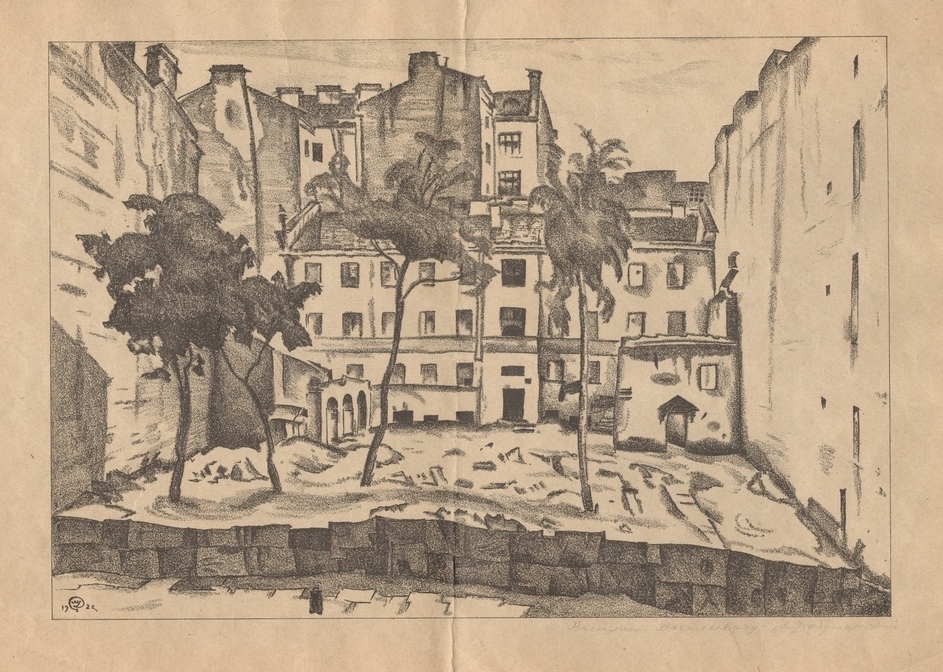