Fomichev Vasily Ivanovich (1908-1998) - Soviet graphic artist, cartoonist, Member of the Union of Artists of the USSR, Honored Artist of the RSFSR (1966). He did not receive a professional education, he studied drawing on his own. Despite this, he achieved high results in caricature. He made posters on various topics, most often political, directed against imperialism, American world politics, NATO and revanchism.

V.I.Fomichev was born in St. Petersburg in the family of a printing worker. But his young years passed in the Urals, where the civil war threw the Fomichevs. At school, the future artist first took up pencils and paints, designed and edited wall newspapers, then became a young correspondent for the Sverdlovsk regional youth Komsomol newspaper «To Change!» In 1925, Fomichev was taken on the staff of this newspaper. This was the beginning of Fomichev's long career in art. Then, his drawings appear on the pages of «Uralsky Rabochy» and other regional publications. The artist worked in Sverdlovsk until the mid-1930s. At the all-Union competition for the best caricature, organized by «Komsomolskaya Pravda», Fomichev was awarded and in 1936 he was invited to Moscow to work in «Komsomolskaya Pravda», and two years later in the editorial office of the newspaper «Moscow Bolshevik». Since that time, he has become a permanent artist of «Moskovskaya Pravda» and «Komsomolskaya Pravda».

In 1939-1940, during the Finnish war, he was sent to the North-Western Front from the newspaper Komsomolskaya Pravda. On the pages of the front-line newspaper «On Guard of the Motherland» a satire section appears with a popular hero of serial drawings - Vasily Terkin, created by Vasily Fomichev in collaboration with the artist Veniamin Briskin. With him, V. Fomichev executed several propaganda posters: «Subscribe to the loan of the third five-year plan» (1939), «... there is no doubt that in our country there will be the necessary number of straitjackets for such madmen» (From the report of Comrade Stalin on XVIII Congress of the All-Russian Communist Party (Bolshiviks), 1939). Since the beginning of the Great Patriotic War, the artist Fomichev serves in the ranks of the Red Army as part of the editorial offices of front-line and army newspapers of the Kalinin, Southern, Crimean and North Caucasian fronts and in the Special Moscow Air Defense Army, leading satirical departments, regularly placing drawings, feuilletons and poems on the pages of soldiers newspapers. He was awarded several orders and medals of the Soviet Union.

After the war, Vasily Fomichev headed the satirical section of the editorial office of the newspaper «Gudok», leads a ruthless and well-aimed fire at bureaucrats, rotozeans, idlers and grabbers. In 1949, Fomichev returned to the Soviet Army, became deputy editor of the «Illustrated newspaper», since 1953 - art editor of the magazine «Soviet sailor». The leading theme of the post-war work of the artist is the struggle for peace and mutual understanding between peoples. He participates in all international exhibitions «Satire in the Struggle for Peace». He fruitfully works in various periodicals of the central press: Izvestia, Pravda, Trud, Krasnaya Zvezda, Gudok, and various magazines.

In 1970 in Moscow at the international exhibition «Satire in the Struggle for Peace» he was awarded the Gold Medal of the Peace Foundation for his great creative contribution to the cause of peace. Possessing an extraordinary imagination of a satirist-graphic artist, the artist creates complex original compositions saturated with funny details - this makes his sheets capacious, expressive, and understandable for the broad masses. Signatures to his cartoons were made by V. Ardov, D. Bedny, A. Tvardovsky, N. Tikhonov, A. Bezymensky, S. Marshak, A. Zharov, M. Spirov, S. Smirnov, N. Entelis and D. Demin. Solo exhibitions of the artist's works on international politics were held in Moscow with great success (1978, 1983, 1985).

Magazine graphics, circulation and original posters of V. I. Fomichev are kept in the funds of the Rybinsk State Historical-Architectural and Art Museum-Reserve, in private Russian collections. 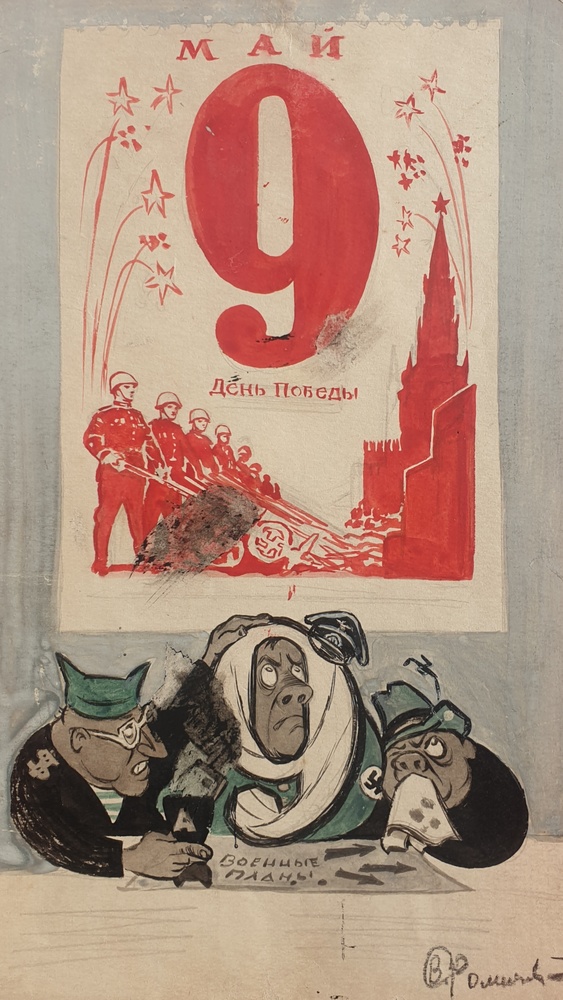