Gorshman Mikhail Efimovich [Mendel Khaimovich] (November 6, 1902, Novoborisov, Belarus) - January 2, 1972, Moscow) - graphic artist, painter, book illustrator. Gorshman received his first professional knowledge in Kostroma, where he studied painting, drawing and woodcuts at the Free Art Workshops under N. N. Kupreyanov and N. S. Iznar (1920–1921). Along with his studies, he worked as a designer in the club of a military hospital.

In 1922 he moved to Moscow and entered the Higher State Artistic and Technical Workshops (1922–1929) at the lithography department, where he studied with N. N. Kupreyanov, P. V. Miturich and V. A. Favorsky. As a thesis, he presented a series of six color autolithographs «Town» (leader N. N. Kupreyanov), created on the basis of a trip to Belarus. In 1929, critic D. Aranovich wrote: «A pupil of N. Kupreyanov and P. Miturich, M. Gorshman was under a stronger influence of the former. Not so much in the sense of lithography technique, but in the sense of style. The most accessible artistic formula for M. Gorshman is expressionism. His everyday scenes of the western town are often saturated with a painfully oppressive mood of poverty, leading to despair, uncivilizedness, on which superstition grows. Fortunately, however, this does not exhaust the gamut of feelings of the young artist. In earlier household autolithographs of M. Gorshman, along with the expressionistic satire, there is a lot of vivacity and cheerful humor. Finally, in the latest works of M. Gorshman the search for monumental and decorative forms is already outlined». Upon graduation, he received the specialty of an artist-technologist in the printing industry.

From 1924 he began to publish his works in newspapers and magazines, such as Atheist at the Machine (1926–1930), Art to the Masses (1929), Krasnaya Niva (1929), etc. «My work in graphics began in magazines and developed mainly in the book», the artist admitted later in his autobiographical notes. Even during his studies at the Higher State Artistic and Technical Workshops, he, on the instructions of the magazine «Atheist at the Machine Tool», made sketches at the Three Mountain manufactory.

Member and exhibitor of the Society of Artists «4 Arts» (1928–1929), Society of Book Artists (since 1930). In 1930-1932 he was a member of the Society of Easel Workers, but did not participate in their exhibitions. Member of the Moscow branch of the Union of Soviet Artists (since 1932). In the first half of the 1930s, Gorshman made numerous creative trips to Jewish collective farms of Crimea (Yevpatoria district), the eastern regions of the country (Birobidzhan), Donbass, and fishing farms of the Caspian on the instructions of the All-Russian Cooperative Society «The Artist» («The All-Artist»). Based on materials from business trips, watercolors, gouaches, drawings and lithographs on genre themes, a series of landscapes and portraits were performed. During a business trip to Crimea, Gorshman worked in the same creative team with M. M. Axelrod, L. Ya. Zevin, L. A. Zholtkevich (1930–1931). In the commune «Voio Novo» in the Yevpatoria region of Crimea, he began a large series of easel watercolors «Crimean Jewish Collective Farms» (1930–1933), dedicated to the life of Jewish immigrants.

In 1939 he painted a panel for the pavilion «Far East» at the All-Union Agricultural Exhibition. In 1941 he was evacuated to Kyrgyzstan, where he led a team of artists at the Kyrgyz Telegraph Agency. He painted portraits, landscapes, made sketches of production processes. In the 1940s and 60s, he continued to engage in book illustration, mainly in his favorite technique of autolithography. In the last years of his life he created a large gallery of portraits and self-portraits. 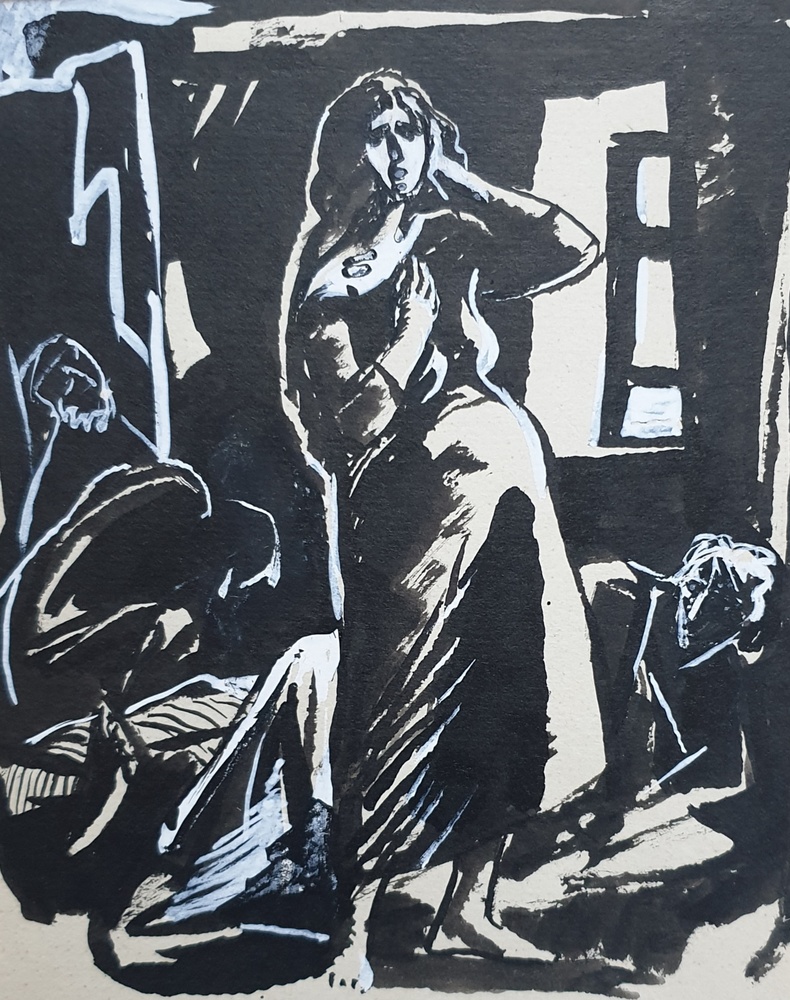 lot 50. «Sketch of an illustration for the story of I. Babel «Transition through the Zbruch»» 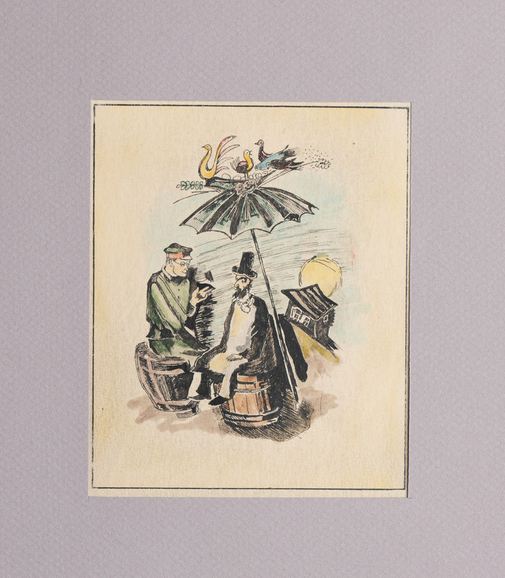 lot 84. «Sketch of an illustration for the stories of I. Babel»