Konstantin Vasilyevich Kuznetsov (March 25 (April 6), 1886 - November 30, 1943) - Russian and Soviet artist, book illustrator, engraver, animator. One of the first illustrators of fairy tales in Soviet Russia. He worked mainly in the cardboard printing technique he invented. Born in the village of Pochinki, Nizhny Novgorod Province (now Nizhny Novgorod Region) into a peasant family. In his youth he served as a clerk in forestry in Vetluga. He became interested in painting under the influence of a cousin - the famous Russian artist, professor of the Academy of Arts Leonid Ovsyannikov, under whose guidance he independently mastered drawing and engraving techniques. He also attended the Drawing School at the Imperial Society for the Promotion of Arts. A graduate of the St. Petersburg gymnasium, he studied at the Psychoneurological Institute, but did not graduate.

From 1910 to 1913 he performed sketches of handicraft toys (ladies, Cossacks, horses), which were exhibited at exhibitions of the Society of Independent Artists in Paris. He collaborated with a number of publications as an illustrator, including the magazines New Satyricon, Apollon, and Russian Icon. He drew cartoons for theater posters and programs, but due to his illness he was forced to leave Petersburg and move to Pyatigorsk, where he entered the service of a telephone exchange.

After the October Revolution, he participated in the creation of the Caucasus «Windows of GROWTH« («Windows of KavGROWTH»). In 1922 he moved to Moscow. In subsequent years, he worked as an illustrator of books for the publishers Detgiz, GIZ, Young Guard, Soviet Writer and others, collaborated with the magazines Krasnaya Niva, Fun Pictures, Murzilka. In the 1930s led the children's circle in the propaganda department of the children's book of the Museum of Public Education of the RSFSR, worked as the designer of the Moscow Museum of children's books. In addition, he owns a series of drawings «Ancient Russia» (1933), the humorous series «Inside Out» (1939-1940) and «The Adventures of Babai» (1942-1943), as well as a number of anti-fascist prints and drawings on the subject of the civil war in Spain .

In parallel, he created easel lithographs and engravings on fairy tales using the method he developed: engraving with a dry needle on cardboard with a tint of watercolors or pastels. He worked in the techniques of woodcut, glassography, lithography, linocut and monotype, experimented a lot. While working at the Museum of Children's Books, he organized a children's club in which he taught children how to make and print books. Together with the artist Ekaterina Zonnenshtral published a training book for preschoolers and their parents, «I am a printer» (1932), where the basics of printing are presented in an entertaining way.

The main place in the work of Konstantin Vasilyevich has always been occupied by illustrations of Russian folk tales, such as «The Wolf and the Seven Little Kids», «Ivan Tsarevich and the Gray Wolf», «On Rejuvenating Apples and Living Water», «Teremok» and many others, as well as fairy tales Alexander Pushkin, Sergei Aksakov, Pavel Bazhov, Samuel Marshak, Agnia Barto and other Russian and Soviet writers. In total, Kuznetsov designed more than two hundred books, many of which were reprinted after his death. Since 1938 he has been trying himself in animation. As a production designer, he participated in the creation of the film «The Tale of Tsar Saltan» (1943), the sketches for which were created before the start of World War II. Also in his filmography there are animated films «Aibolit» (1938) and "Beater" (1940) (possibly released under other names).

Kuznetsov’s works were exhibited at various All-Union and foreign exhibitions, including the International exhibition «The Art of the Book╗ in Leipzig and Nuremberg (1927), the exhibition «New Methods of Manual Printing in Printing Production» in the Tretyakov Gallery, organized by Anatoly Bakushinsky in 1933, at exhibitions of Soviet graphics in Helsinki, Tallinn, Stockholm and Gothenburg (1934), in the Bloomsbury Gallery (1938) and in New York (1940). Member of the Union of Artists of the USSR since 1937. He died on November 30, 1943 from tuberculosis, a disease that he had had since his youth, worsened during the war.

In 1949, a memorial exhibition of Kuznetsov's works was held in Moscow. In 1950, two monographs were published simultaneously dedicated to the artist’s life and work: «K. V. Kuznetsov» by art critic Maria Kholodovskaya and the article «Konstantin Viktorovich Kuznetsov» by art critic Alexei Korostin. His works are present in many museum collections, including the Pushkin State Museum of Fine Arts and the State Russian Museum. 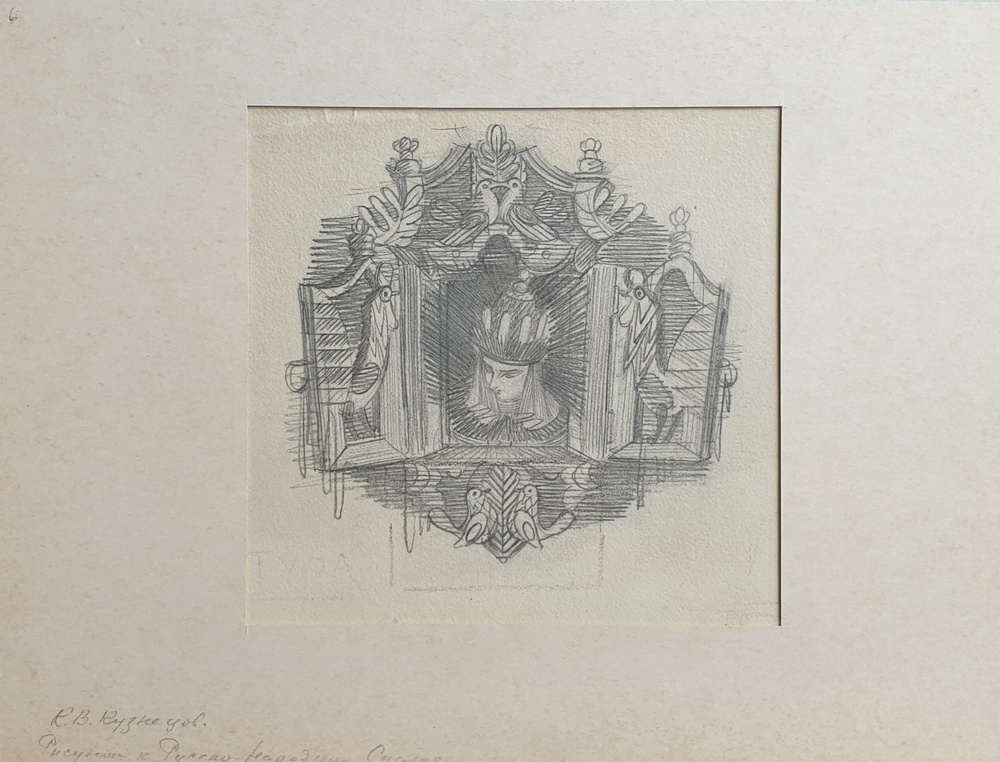 lot 54. «Sketch of the screensaver for the Russian folk tale «Sivka-Burka»»