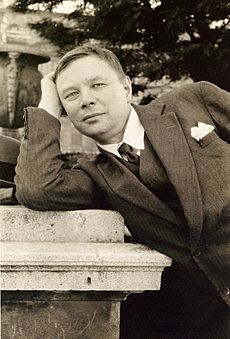 Mikhail Fyodorovich Larionov (May 22 [June 3], 1881, Tiraspol, Kherson Province, Russian Empire - May 10, 1964, Fontenay-o-Roz) - Russian artist, painter, graphic artist, stage designer, art theorist, one of the founders of the Russian avant-garde . Born in the Kherson province, in the county town of Tiraspol. The son of a military paramedic, spent his childhood in the south of Russia in Tiraspol, where he then often returned to summer studies.

In 1891, the Larionovs arrived in Moscow, and Mikhail entered the Voskresensky real school. In 1898-1910 - studied at the Moscow School of Painting, Sculpture and Architecture with Valentin Serov, Isaac Levitan and Korovin Konstantin. There he met with Natalya Goncharova, who became not only his life partner (officially marriage was registered only in 1955), but also a like-minded artist.

Since the early 1900s, Larionov actively participated in the artistic life, exhibiting not only in Russia but also in Europe. French painters had a great influence on Larionov, whose work he first met in the Moscow collection of Sergei Schukin. In 1902-1906 he worked in the style of late impressionism («Lilac bush in bloom»). In 1906, at the invitation of Sergei Diaghilev, he participated in the Russian section of the Paris Autumn Salon.

In 1907, experiencing the influence of Fauvism and naive art, he turned to a primitive style, creating memorable paintings that are distinguished by their juicy color, sharp lines and sharp scenes («Resting Soldier», «Spring»). By 1912, he created a new artistic concept - rayism, one of the first examples of abstract art in the category of so-called «non-objective creativity», where forms were formed as a result of the intersection of rays reflected from various objects.

In 1914, after the outbreak of World War I, he was called up for military service. After discussing the injury, Larionov settled in Paris, where in 1915-1929 he worked with Goncharova for Diaghilev, creating costumes and sets for the productions of his Russian Ballets. In painting, he returned to an early, figurative, manner, chamber genre and still life. Due to the outbreak of the October Revolution, he never returned to Russia.

In 1955, he officially registered his marriage with Natalia Goncharova. After her death in 1962, he married A.K. Tomilina, who became the official heiress of the artist. He died in the Paris suburb of Fontenay-o-Roses in 1964. Buried in a cemetery in Ivry-sur-Seine. In Tiraspol there is a street named after the artist.