Morozov Victor Vasilievich (1904–1961) - Soviet artist, graphic artist. Born on March 9, 1904 in Perm. From the age of fifteen, he worked as an apprentice fitter at a factory, a lumberjack, a loader, a pecker on Kama rafts. In 1927 he graduated from the Perm Art and Pedagogical College, without interrupting work on rafts. After serving military service, the artist moved to Leningrad, where he was engaged in teaching.

V. Morozov successfully tried his hand at easel painting and decorative art, worked a lot for the theater. In 1934 he entered the Academy of Arts. He creates in the workshop of Professor I. Ya. Bilibin, P. A. Shillingovsky, K. I. Rudakov. Creative friendship with E.S. Kruglikova was also fruitful for him, which influenced the artist. He graduated from the graphic department of the All-Russian Academy of Arts in the workshop of P.A. Shillingovsky and I.Ya. Bilibina (1940). The graduation work at the Academy is the design of the book by Yu. Tynyanov «Kyuhlya». Rating is good. The training took place at the graphic faculty. Awarded the title of graphic artist.

In the future, most convincingly, the artist showed himself as a book illustration. Viktor Morozov performed illustrations in the books of A. Pushkin, I. Goncharov, L. Tolstoy, G. Uspensky, G. Kholopov, V. Sayanov and many others. V.V. Morozov also worked in the field of prints (lithography, etching, woodcut), creating many expressive landscapes with views of Leningrad. He also performed a large series of gouache drawings and prints on the Patriotic War and the liberated Leningrad.

From 1941 to 1945 he served in the ranks of the Soviet Army. During the blockade V.V. Morozov designed: The album “Heroes of air battles for Leningrad”, 1942. Participated in the creation of a series of besieged postcards in the technique of lithography, illustrated N. Tikhonov’s books “Leningrad Year”, “Leningrad accepts battle”, etc. After the war, illustrated (partially) Goncharov’s book I.A. Oblomov, 1948 In 1949, in the walls of the Leningrad Union of Artists, a personal exhibition of the artist’s works was opened, which was then transferred to the House of Art. Stanislavsky and the House of Cinema. Even before the war, the artist’s works fell into the collection of the Russian Museum, the Tretyakov Gallery, the Museum named after A.S. Pushkin, in the Kiev Museum and many others. 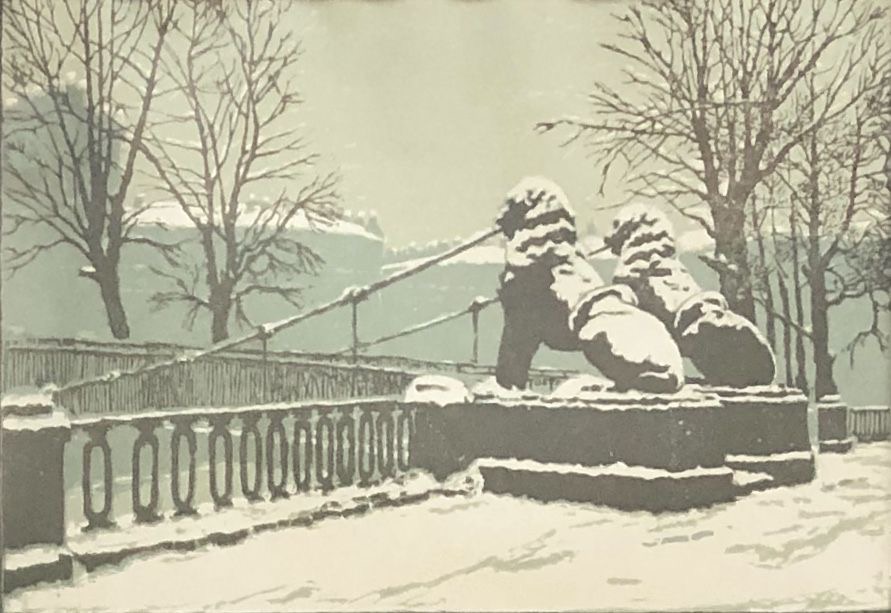