Vladimir Ovchinnikov's childhood and youth were spent on the Volga, in Saratov. He was born on July 14, 1911 in the village of Esipovka in a peasant family. According to the memoirs of the artist's brother, the village of Esipovka was located on the 8th verst of the Astrakhan highway, which went south from Saratov. In 1917 there were 60 courtyards. Mother, Nadezhda Yakovlevna, did not live long and died in 1916. His father, Ivan Dmitrievich Ovchinnikov, during the Great Patriotic War, worked at the slaughterhouse and the children remained in the care of the grandmother and aunts. Volodya went to study in 1920, and somewhere in the third class, he met with the guys involved in the fine arts circle at the Palace of Culture of Railwaymen, and also enrolled in it. Soon he began to make progress in drawing and then decided to learn from the artist. Everything else for him was already secondary.

In 1928, Ovchinnikov entered the Saratov Art College, studied under P. S. Utkin. In 1931, after graduating from the technical school, he left to continue his studies in Leningrad, where he entered the Institute of Proletarian Fine Arts (from 1932, the Leningrad Institute of Painting, Sculpture and Architecture), however, after completing the first year, he left his studies for family reasons. In early 1932, the firstborn son, Vyacheslav, who later became, like his father, an artist, appeared in the family of Vladimir Ovchinnikov. In 1937, the youngest son Leo was born.

In 1932–1941, Ovchinnikov worked as a graphic designer in various institutions of Leningrad. At the same time he was engaged in painting and drawing, first in the private studio of Vasily Savinsky, then at the Leningrad Institute for the Advanced Training of Artists under Pavel Naumov, Alexander Karev, Rudolf Frenz.

After the start of World War II, Ovchinnikov worked at the Leningrad TASS office on the design of the Agitokon. In the winter of 1942, completely exhausted, he was taken out of besieged Leningrad to Saratov. After recovering in 1943, he graduated from the Saratov Military Infantry School and until the end of the war he was in the ranks of the armed forces as assistant commander of the marching company of the 375 reserve separate regiment of the 16th rifle division. Demobilized in December 1945 with the rank of lieutenant. He was awarded the Order of the Patriotic War, 2 degrees, the medal «For the victory over Germany». Ovchinnikov's younger brother Gregory died in the fall of 1941 in battles near Leningrad on the Karelian Isthmus.

Returning to Leningrad, Ovchinnikov worked in Lenizo, carried out advertising and design orders for the largest department stores of the city DLT and Passage. At the same time, he restored the creative skills that had been lost during the war years, and he worked extensively on a full-scale sketch in the city and its suburbs (Priozersk, Komarovo, Levashovo). In 1953, after showing at the exhibition a series of landscapes made in Ukraine near Kanev, Ovchinnikov was accepted as a member of the Leningrad Union of Soviet Artists.

From the beginning of the 1950s, Ovchinnikov's works were invariably exhibited at Leningrad, Republican and All-Union exhibitions, always, according to N.V. Vasilva, attracting the attention of a high pictorial performance culture and a special insight into the natural world. Landscape becomes the leading genre for him, the basic forms are a full-scale sketch and large landscapes-paintings.

In the panoramic landscapes of the early and mid-1950s, the artist sought to cover as much space as possible, to depict a multitude of clearly readable plans. Known examples of painting of this period are the works «On the Volga» (1951), «Evening. At the Well» (1953), «Dnieper Cliffs» (1955), «Spring» (1956), «Dnieper Region» (1957). They were distinguished by the sophistication of color, the richness of tonal relations in the transmission of states of nature and the light and air environment, the use of a diverse writing texture. The artist paid much attention to writing the sky, considering it to be decisive for the entire pictorial work. In 1953, after showing at the exhibition a series of such works made in Ukraine near Kanev, Ovchinnikov was accepted as a member of the Leningrad Union of Soviet Artists.

In the mid-1950s, Ovchinnikov repeatedly made trips to the city of Kanev on the Dnieper. Delighted with the beauty of the Dnieper shores, he wrote many sketches, expressing in them a living, direct impression of the majestic picture of what he saw. Among them are «Before the Rain» (1954), «Evening on the Dnieper» (1956), «On the bank of the Dnieper» (1956), «Night» (1957) and others. It was during this «Kanevsky» period, Ovchinnikov’s painting acquires that breadth, scale, color, tonality, which will later make up the important features of his individual style, according to which his works will be unmistakably recognized at exhibitions.

In the late 1950s, Ovchinnikov made several trips to the Caspian. And again, new bright impressions capture him. The southern nature, filled with sun and light, turned out to be very close to the artist, in the Caspian etudes and paintings the powerful pictorial talent of Ovchinnikov is already fully revealed, his painting acquires texture, special sonority and unusual coloring («Makhachkala. Port», 1958, «Trial at night», 1958, «The Girl and the Waves», 1958, «Fishermen of the Caspian Sea», 1958, «Moryana. Caspian Sea», 1959, «When there is Putin (Caspian Sea)», 1959, «Caspian Sea. Fishing Boats», 1959, and others .

In the 1960-1970s, the Volga, the village of Pristannoe, and also the ancient Volkhov, the ancient Russian cities of Torzhok, Staritsa, became the main theme of Ovchinnikov’s creativity. He repeatedly works on the creative base of Leningrad artists in Staraya Ladoga. Among them are the works «On the Volkhov», «Volkhov» (both 1969), «Spring», «George’s Cathedral in Old Ladoga» (both 1971), «Spring is Coming», «George’s Cathedral. Clear day», «Silence», «Ice passed» (all 1972) and others.

Noting the dramatic beginning of Spring inherent in the landscape, N. V. Vasilyeva wrote about her work in the introductory article to the exhibition catalog of V. I. Ovchinnikov in 1984: «The heads of the cathedral are directed to the sky with heavy clouds sweeping up against and especially stable. The solemn elevation of the image is achieved by simple means: the artist chooses a very low point of view, which makes it possible to make the hill with the cathedral standing on it as if even higher and more majestic. Deep blue shadows on the snow and lead clouds inform the work of emotional elevation and some tension. At the same time, the image is reliable, saturated with signs of the time».

Works of Vladimir Ivanovich Ovchinnikov are in the State Russian Museum in St. Petersburg, in museums and private collections in Russia, France, Japan, Italy, Great Britain, the USA and other countries. In 1988 in the halls of the Leningrad Union of Artists a personal exhibition of the artist's works was held, to which a detailed catalog was published. In 1989–1992, the works of V. I. Ovchinnikov were successfully exhibited at exhibitions and auctions of Russian painting L 'Ecole de Leningrad in France. Known paintings and graphic portraits of V. Ovchinnikov, executed in different years by Leningrad artists, including O. Lomakin (1956).

In the mid-1970s, Ovchinnikov became seriously ill, underwent two operations. He died on June 22, 1978 in Leningrad at the sixty-seventh year of life. He was buried in the North Cemetery of St. Petersburg. In 1994, after the death of the artist's widow, Vera Gavrilovna Ovchinnikova, his ashes were reburied in the columbarium of the Petersburg crematorium next to his wife and son Vyacheslav, who died in 1993. 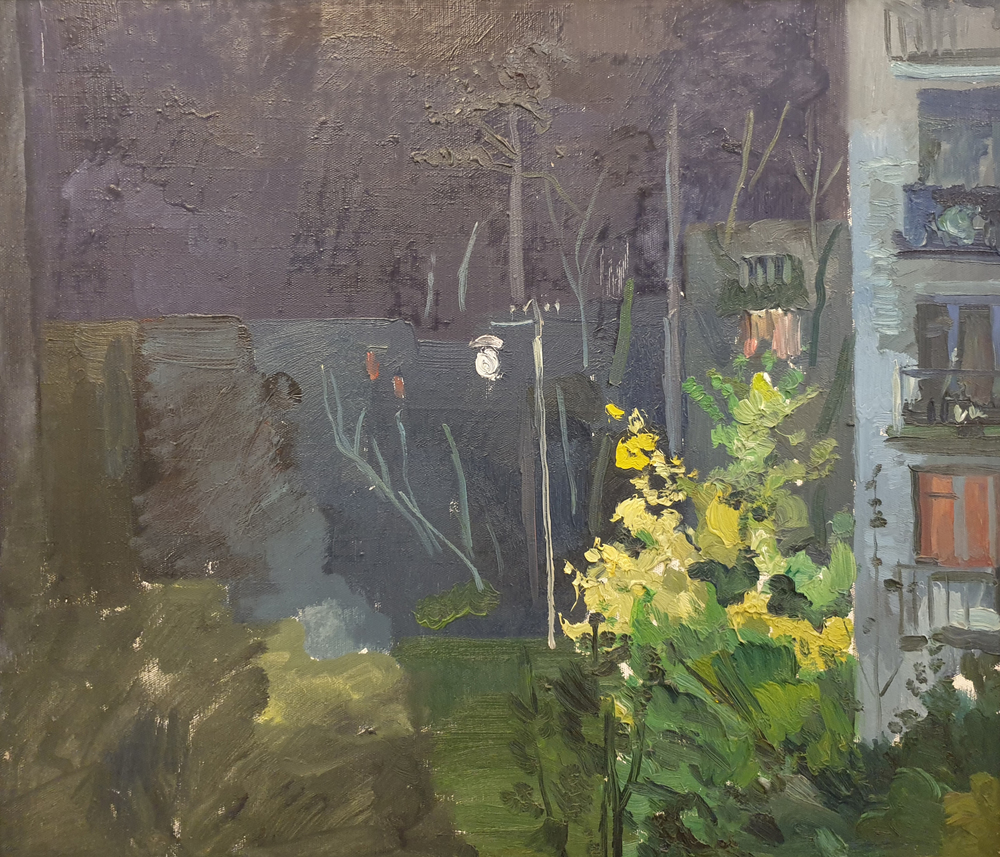