Plotnov Andrey Ivanovich (1916-1997) - Soviet and Russian painter and graphic artist, war artist of the Studio at the Main Political Directorate of the Border Troops, member of the Studio of War Artists, member of the Moscow Union of Artists. A prominent representative of Soviet art, public figure, propagandist of folk art, as well as Honored Artist of the RSFSR (1968), holder of the Order of the Badge of Honor, honorary citizen of the city of Dankov.
Andrey Ivanovich was born on July 21, 1916 in the family of a peasant from the village of Verkhnee Pavlovo, Dankovsky District, Lipetsk Region. His parents were simple peasants, but they really wanted their son to receive a good education. He studied at the rural school number 1 in Dankov. In 1932, Plotnov and his family moved to Moscow and entered high school, in 1933 he entered the Art College of the United State Publishing House of Fiction. Plotnov studied at the third year of the technical school, when the Moscow Art Institute began to form, which later received the name of Vasily Ivanovich Surikov. The director of the institute, I.E. Grabar, gathered students for the first year of the faculty of painting from students of art technical schools and colleges, thus Plotnov became a student of the institute in 1936. At the institute, Plotnov got into the class of the very demanding professor G.I.Schegal and assistant V.V. Pochitalov, whom he still remembers with gratitude.

The Great Patriotic War of the Soviet people interrupted Plotnov's work on his diploma. In the troops of the Moscow militia, he is serving at the front. In October, like many undergraduate students who joined the ranks of the militia, he was recalled from the front to complete his education. A. I. Plotnov's diploma work "Frunze and Chapaev near Ufa" is one of the significant canvases dedicated to the heroics of the civil war. The painting was first shown at an exhibition of diploma works in 1943 in Moscow. Subsequently, she appeared at various exhibitions and was published in mass circulation more than once. Already in his early works A.I. Plotnov showed himself to be an adherent of the psychological portrait and landscape. Immediately after defending his diploma, in 1943, Plotnov, already a member of the Moscow Union of Artists, became a war artist at the Studio under the Main Political Directorate of the Border Troops, and painted pictures dedicated to the Great Patriotic War. With a sketchbook, and even with a rifle, he appears on different sectors of the front: on the Kursk Bulge, in Odessa, Sevastopol and other places. He painted sketches, often went to the front line, where he made sketches of military episodes, soldiers of the Soviet Army, their heroic deeds, which are still invaluable material in his creative work. For courage and heroism, the patriotic artist was awarded military orders and medals. However, the artist's work in the war was not limited to collecting visual documentary material. Based on live observations and sketches, Plotnov created more than twenty posters of the military glory of the Red Army and military posters «TASS Windows». Such of them as «Be worthy of the military glory of the Soviet fleet!», «Glory to the heroic Red Army!», «The port of Klaipeda will be restored!».

During his stay at the Studio of War Artists, Plotnov became closely acquainted with the artistic director of the studio, the famous Soviet painter Pavel Petrovich Sokolov-Skalya; here their strong creative friendship was born, which lasted for many years and gave the Soviet fine arts a number of most interesting works. Their first joint work is dedicated to the feat of 22 skiers, defenders of Moscow. The painting, which is in the Museum of Border Troops, vividly and vividly recreates the heroic image of Soviet soldiers. At the 1947 All-Union Art Exhibition, their other joint work, «The Storming of Sevastopol», appeared, conceived as a picturesque part of the panorama. Four years later, at the All-Union Art Exhibition, P.P.Sokolov-Skalya and A.I. Plotnov, as part of a team, showed a monumental canvas dedicated to the construction of the Kuibyshev hydroelectric power station. The creative activity of the artist Andrei Ivanovich Plotnov in the first post-war years was not limited to participation in collective works. The creativity of Andrei Ivanovich has always been characterized by a civic sound and loyalty to the best traditions of Russian classical art. During the same period, he created a number of works, some of which were included in our selection. At the All-Union art exhibition dedicated to the 30th anniversary of the Armed Forces of the USSR, one of the most significant and interesting works of the artist appeared - «Landing of troops on the Kuril Islands». The painting recreates the image of Soviet soldiers, their strength and readiness to carry out the order of the Motherland to the end. At the 1951 All-Union Art Exhibition, Plotnov gave a number of works showing the builders of the Kuibyshev hydroelectric power station: a portrait of a diver Vasily Zhurkin, a generalized image of a young builder; a picture that reproduces the unloading of building materials and equipment. From this series, the painting «To the Construction Site» stood out. Plotnov repeatedly returned to the themes of the construction of the Kuibyshev hydroelectric power station in subsequent years. The fifties in the artist's work were even more fruitful. During this period, he creates more than a dozen large compositional canvases, participates in almost all major exhibitions of Soviet fine art. His paintings find their way to the heart of the viewer in the most diverse corners of our Motherland, from the Far East to the Baltic republics.

Well-known are his works such as «Meeting of Heroes» (1952), «Capra at the Kuibyshev Hydroelectric Power Station», «Zoya» (1954), «Speech by M. I. Kalinin among front-line agitators» (1956), «Defenders of Sevastopol» (1956 —1957), «The Taking of the Kremlin» (1957), «Volochaev's Days» (1958), «1919 in Vilnius» (1955) and a number of others. The artist created many thematic paintings in the 60s. There are paintings «Miners of Vorkuta» (1960), «At the mine of Vorkuta» (1961) and works devoted to the development of virgin lands. In the same period, Plotnov painted the paintings «Speech by V. I. Lenin on Red Square» (1965) and «Speech by V. I. Lenin at the Finland Station in 1917» (1966). The proposed selection of postcards from the artist's works of the 60s includes «Aurora» (1960), dedicated to the culmination of the Great October Socialist Revolution, «Smolny» (1965), the painting «Winter is taken» (1967), paintings about the life of our contemporaries, wonderful virgin land people «Bird-house. Virgin Land» (1962) and «Virgin Lands Are Built» (1964), First Furrow (1967), «Polenovo» (1967). Artist Plotnov with all his work gravitates towards multi-figure thematic compositions. Portrait in his work occupies a relatively smaller place, and These are mainly compositional portraits. For example, the portrait-composition «Richard Sorge» (1967). It shows not only the inner world of a person, his courageous character and deep thought, but also the situation in which the hero-scout had to act. - a tireless artist and no less passionate traveler. He visited almost all corners of our country - from the Kuril Islands to the western borders, from the Arctic to the city of Kushka, the southernmost point of the USSR. As a result of his trips around the country, hundreds and hundreds of sketches were collected, a wealth of material for creative work.

He also traveled a lot to other countries. Plotnov has traveled all over the world. He visited Italy, France, Syria, Lebanon, Sweden, Belgium, Greece, Turkey, England, Brazil, Japan, India, the United States, and others. Examples of works are: «Venice» (1956), conveying the beauty of the Italian city, and  «The Builder of Hiroshima» (1963) is a portrait of a Japanese worker full of inner nobility. Andrei Ivanovich did a great deal of social work in Moscow art organizations and in the Society for Cultural Relations with Foreign Countries. He was repeatedly elected a deputy of the Frunze Council of People's Deputies of the city of Moscow. For many years he was a member of the bureau of the painting section of the Moscow organization of the Union of Artists of the RSFSR, was the chairman of the art council of the Voronovo Art Gallery and the patronage commission of the Union of Artists of the RSFSR. By his selfless labor, folk galleries were created in Transbaikalia, Udmurtia, Chukotka in the Krasnodar Territory and in other regions of our country. A. I. Plotnov initiated the creation of an art gallery and a Children's Art School in the city of Dankov. Andrei Ivanovich more than once confessed to his friends that wherever fate took him, he never forgot about his small homeland. Plotnov often visited the places where he spent his childhood and youth. Once, while visiting the Dankovo ​​Museum of Local Lore, he had the idea of ​​creating an art gallery in Dankov (Small Tretyakov Gallery). This idea was happily supported by the then leaders of the district, museum staff and the local intelligentsia. On May 30, 1968, the grand opening of the Small Tretyakov Gallery took place in the city of Dankov, which resulted in a citywide celebration. Such eminent artists and sculptors as V. G. Tsyplakov, N. A. Sysoev, S. I. Dudnik, V. S. Sorokin, G. G. Nissky, V. K. Nechitailo, E A. Kibrik, V. P. Efanov, L. E. Kerbel and others. And of course, A.I. Plotnov himself made a huge contribution to the collection of paintings. Returning to Moscow, Andrei Ivanovich turned to his friends - artists - with a request to help in this endeavor. They willingly responded to the request of their colleague and presented their paintings as a gift for the future gallery. Over the years, Andrei Ivanovich devoted a lot of time and effort to expanding the funds of the Dankov Picture Gallery.

Today the Dankovskaya Gallery has about 600 paintings by masters from different periods of the 20th century. Including the works of A.I. Plotnov. Young artists of the School of Arts hold classes in the halls of the art gallery. Local artists present their creative reports here. Some of the best works by A. I. Plotnov are exhibited in the hall: «Winter is taken», «Richard Sorge», «World champion in equestrian sport Elena Petushkova» and other paintings. Every year Andrei Ivanovich visited Dankovo ​​and performed in front of a very different audience: schoolchildren, workers, rural workers, war veterans ... The work of A.I. Plotnov is distinguished by genre diversity: a historical theme, a portrait, a landscape, a still life ... , reflects the memory of the traditions of Russian classical art. Many of his works on the military theme and space have become textbooks. The soul of the Russian person and his national character are revealed in vivid, memorable images. Andrey Ivanovich Plotnov died on May 13, 1997. According to his will, he was buried in his native Dankov. The memory of the outstanding artist-fellow countryman is sacredly honored on Dankovskaya land. 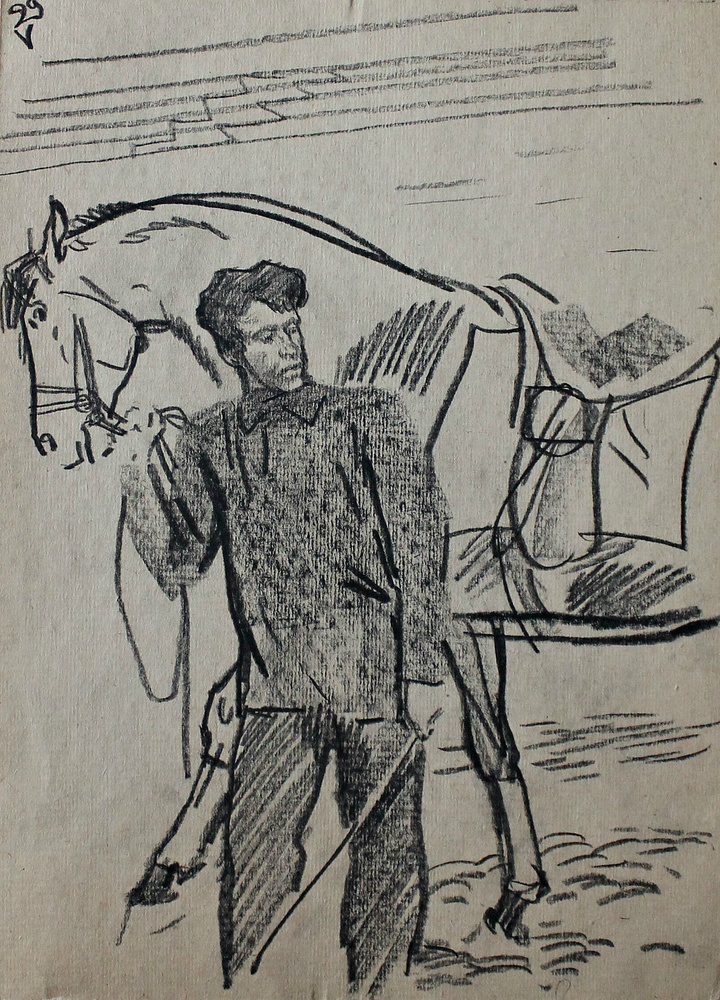 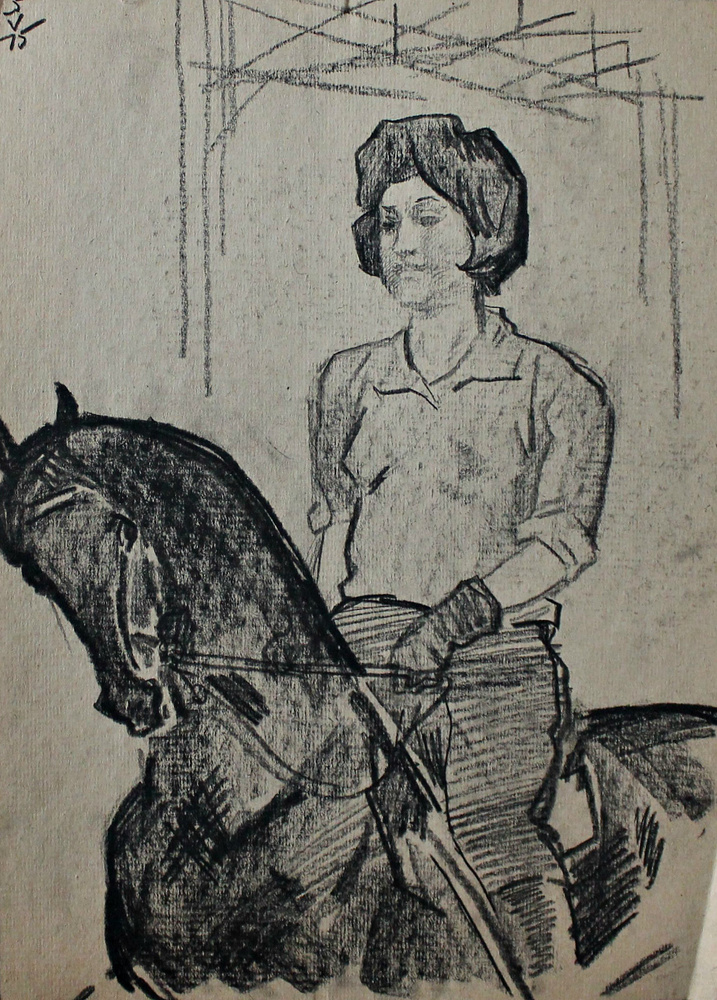