Mikhail Grigorievich (Girsh-Leibovich) Reuter (1916, Vinnitsa, Podolsk province, Russian Empire - 1993, Moscow, Russian Federation) - Russian graphic artist, book illustrator, Member of the Union of Artists of the USSR. Mikhail Grigorievich studied at the workers' faculty of the Kiev Art Institute, in 1937 he entered the Central Studio of Fine Arts of the All-Union Central Council of Trade Unions, where among his teachers were Konstantin Yuon, Nikolai Romadin and Aminadav Kanevsky. The student's abilities were noticed, on the recommendation of I. Grabar - director of the Moscow Art Institute - in 1939, Mikhail Roiter was enrolled in the 3rd year of the graphic faculty of the Moscow Art Institute. In 1946, the artist's education was completed with his diploma work - illustrations for the novel by F.M. Dostoevsky «The Humiliated and Insulted». In the same year he was admitted to the Union of Artists of the USSR, and in 1947 he took part in an exhibition at the I World Festival of Democratic Youth and Students in Prague and was awarded an honorary diploma for the illustrations presented.

The first order of M. Roiter was illustrations for F. Dostoevsky's novel «The Teenager». And in the future, Reuter's creative life was associated with the works of Dostoevsky: he also illustrated such works of the writer as «Netochka Nezvanova», «Meek», «The Brothers Karamazov», «Demons». Many of the artist's drawings and watercolors are associated with the life of the writer and the heroes of his works.

Since the late 1950s he traveled around the country as a special correspondent for the newspapers Pravda, Komsomolskaya Pravda, Literaturnaya Gazeta and the magazines Ogonyok and Yunost. The travel history was reflected in a series of his works: about Bratsk and the Krasnoyarsk hydroelectric power station, the industrial Urals, oil fields in Baku, the Lenin Komsomol Automobile Plant in Moscow. He worked in the Far East and Kamchatka, in the Pamirs, in Murmansk, in the Ukraine.

Sports was one of the favorite topics of modern life for M. Reuter. He participated in all specialized All-Union exhibitions dedicated to sports. Many of his genre works of the 1950s and 1960s are dedicated to athletes and Soviet youth in general. Took part in regional, zonal and Moscow art exhibitions. At the turn of the 1960s-1970s, the artist worked in the watercolor technique, created a number of interesting works on the theme of sports: «Rhythmic Gymnastics», «On a Treadmill», «Hockey», «Racer».

Reuter dabbled in various graphic techniques. He drew with a pen, worked in the technique of monotype, linocuts and lithography, achieving particular success in etching. Since the late 1970s, M. Reuter concentrated on the watercolor technique, immortalizing the changing faces of Moscow, Leningrad, and a number of provincial cities. He painted sweeping impressionistic cityscapes depicting disappearing Moscow and a new image of the city.

Buried at the Khovanskoye cemetery. The artist's works are in many regional museums, as well as in private collections in Russia and abroad. 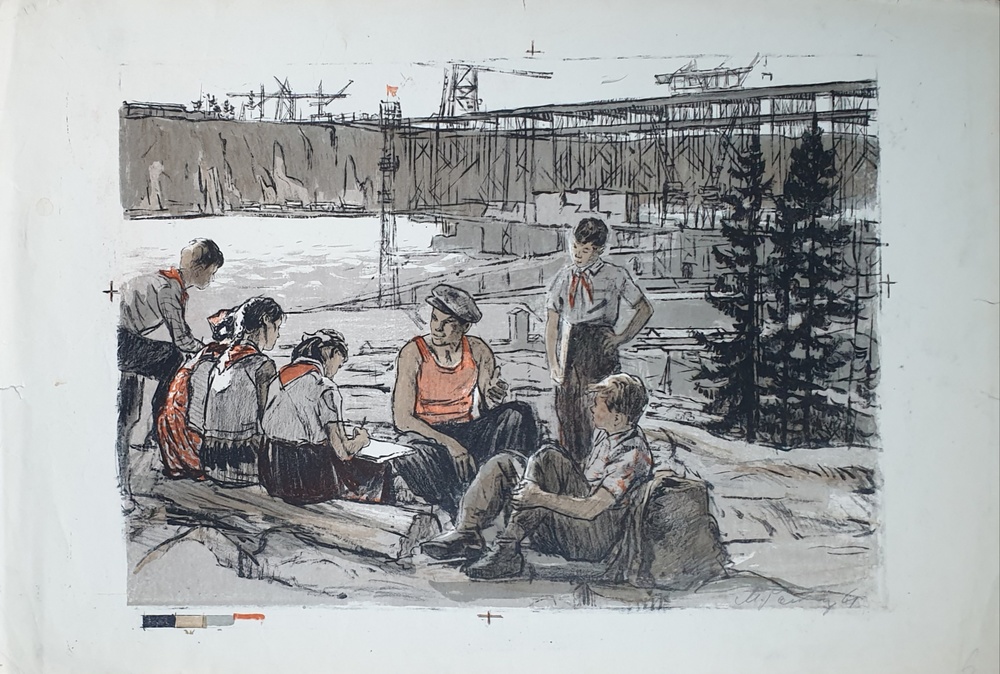