Sulimo-Samuillo Vsevolod Angelovich (1903, Velikiye Luki - 1965, Leningrad) - painter, graphic artist, theater artist, member of the Union of Artists of the USSR. In 1919-1924 he worked as a graphic designer at the Velikoluksky Drama Theater. In 1924 he moved to Leningrad. In 1924-1926 he studied at the Leningrad Art and Industrial College with Pavel Andreevich Mansurov, Mikhail Pavlovich Bobyshov, in 1926-1930 with Pavel Nikolaevich Filonov. From 1926 to 1932, a member of the association «Masters of Analytical Art».

After the decision of the Politburo of the Central Committee of the All-Union Communist Party of Bolsheviks «On the restructuring of literary and artistic associations» (1932), V. A. Sulimo-Samuillo lost not only the opportunity to exhibit, but also the right to live as before. Not wanting to part with the profession, Vsevolod Angelovich took up design activities. From now on, the sphere of application of his talent and strengths was the development of product designs manufactured by Soviet factories and factories, the «appearance» of city holidays and sports parades, shops and pavilions, circus and theater posters, book illustrations. One of the outstanding works of Sulimo-Samuylo was the development of the design of the First Leningrad Carnival in 1937. Together with P.P. Snopkov, he made sketches of pavilions, carnival chariots and costumes of participants.

Design work by Sulimo-Samuillo and other professional artists of his generation who worked in this area in Leningrad, despite their seeming insignificance and momentaryness, largely created the «face» of the city. And it was the participation of these professionals, who had an undoubted deep artistic (avant-garde) culture, that shaped the look and reputation of Leningrad in the 1930s and 1950s, the city of high everyday culture.

V. A. Sulimo-Samuyillo was engaged in the design of expositions in the Peter and Paul Fortress, in the palaces and museums of Peterhof, Pavlovsk, Pushkin, in the late 1950s he worked on creating a large exhibition in the Rumyantsev Mansion. During the Great Patriotic War (1942-1946 (?)) He was evacuated to Votkinsk. He worked at the Votkinsk plant as a graphic designer. In the 1950s, Vsevolod Angelovich took part in the design of the pavilions of the All-Union Agricultural Exhibition in Moscow and the World Exhibition in Brussels. Since 1958, he taught at the staging department of the Theater Institute. A. N. Ostrovsky (now the St. Petersburg State Academy of Theater Arts). Among the theatrical works are sketches of theatrical scenery and costumes for the play «The Roots of Capitalism» by M. M. Zoshchenko, «Guilty Without Guilt» by N. A. Ostrovsky and many others.

The artist’s works of the «analytical period» are filled with Filonov’s «spirit», bear the imprint of time of endless searches and courageous experiments. However, Sulimo-Samuyillo retained forever the «principle of accomplishment», proclaimed by «analysts» in the manifesto “Intimate Workshop of Painters and Draftsmen «Paintings Made» (1914): «Our goal is to work on paintings and drawings made with all the charm of hard work, so as we know, the most valuable thing in a picture and a drawing is a person’s mighty work on a thing in which he reveals himself and his immortal soul». Works of the late period - sketches, the finest watercolors, pencil drawings, sketches represent not only the creative potential of the master, but also a significant section of the city's history, sometimes solemn and magnificent, and in hard times - gloomy and hopeless.

The works of V. A. Sulimo-Samuillo are kept in museums of St. Petersburg, in the Museum of Local Lore of Velikiye Luki, in the Pskov Museum-Reserve. The collection «Fine Arts» of the funds of the Museum of History and Culture of Votkinsk contains 82 graphic works by Vsevolod Angelovich, made in pencil, ink, and watercolor. 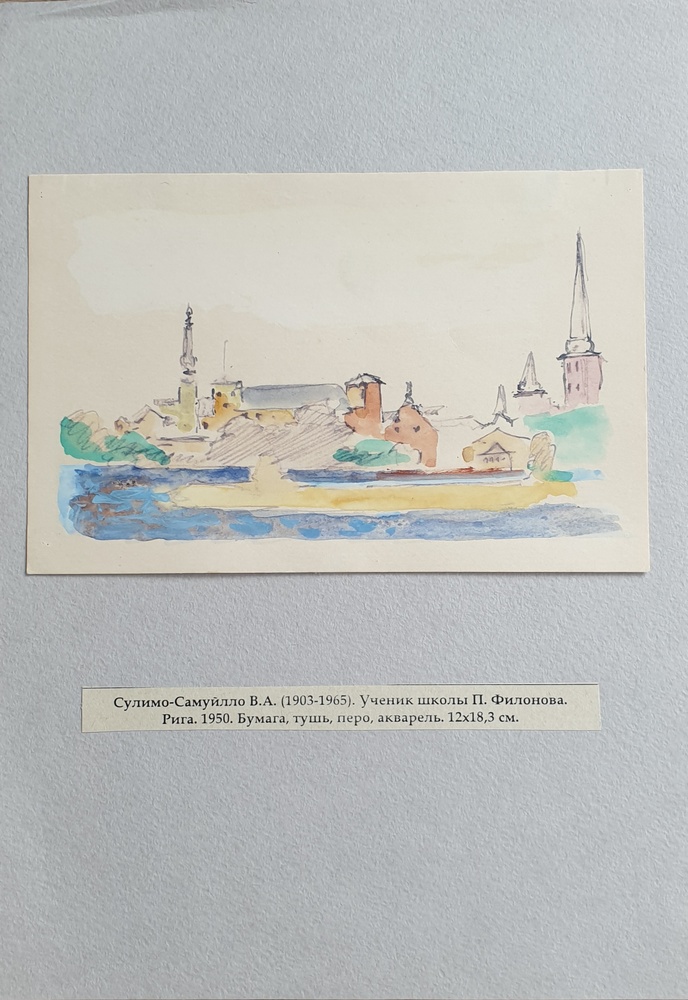