Solomon Borisovich Yudovin (Shloyme Borukhovich) (October 15 (27), 1892, Beshenkovichi of the Lepel district of the Vitebsk province - December 5, 1954, Leningrad) - Belarusian-Jewish and Soviet graphic artist, ethnographer, representative of the «Jewish Renaissance»(«Jewish revival») and modern. Solomon Borisovich (Shloyme Borukhovich) Yudovin was born in the town of Beshenkovichi near Vitebsk (50 km to the west) into a Jewish family. The father of the future artist was a craftsman, his mother was a housewife. In 1906, at the age of eight, Shloyme Yudovin was admitted to the Vitebsk School of Drawing and Painting of Yu. M. Pen.

From his youth Yudovin was attracted by the «Jewish Renaissance» movement, which was part of the general avant-garde movement in Russian art. This movement largely shaped his artistic interests. The participants of the «Jewish Renaissance» saw their main task in the study and artistic understanding of the Jewish national heritage: Jewish customs and traditional Jewish life. Yudovin fully shared the goals of the Jewish Renaissance movement, and therefore enthusiastically accepted the offer to participate in folklore and ethnographic expeditions along the Jewish Pale of Settlement to the cities and towns of southwestern Ukraine (Podolsk, Volyn and Kiev) provinces, organized in 1912-1914. Jewish Historical and Ethnographic Society under the leadership of S. An-sky at the expense of Vladimir Gintsburg - the son of Baron G. Gintsburg.

Preserving the traditions of folk art of the Jews of the Russian Empire was the main goal of these expeditions, in which Yudovin acted as secretary, artist and photographer. He sketched and photographed everything related to Judaica - Jewish household items, ritual accessories, gravestones (matzevah), synagogue murals, Jewish ornaments, studied the artistic features of Jewish ritual and decorative and applied art. As a photo artist, Yudovin worked in the technique of pictorialism (photo-impressionism), striving to turn photographs into works of art by influencing them in the process of shooting and developing.

A separate historical and artistic value is represented by the many images of Jewish workers and Jewish artisans captured by Yudovin the photographer, as well as various forms of Jewish collective labor: artels of ropemen, cigarettes, weavers, a match factory in Rovno, and much more. The significance of Yudovin's work in these expeditions is especially high, since his photographs were among the last, in which one can still see the traditional world of the Jewish community of the Pale of Settlement, which soon completely disappeared in the First World War, under Soviet rule and finally - during the Holocaust. In 1920, on the basis of the collected material, Yudovin published an album «Jewish Folk Ornament» of 26 linoleum engravings.

The direction of creativity and artistic style of Yudovin were formed both thanks to his activities in An-sky's expeditions, and under the influence of the Russian-Jewish avant-garde of Vitebsk and, to a lesser extent, Kiev art schools. First of all, these are M. Chagall, E. Lissitzky and N. Altman, who dreamed of creating a new Jewish style, combining the avant-garde with Jewish folk art. But with all the innovations in their works, including Yudovin's, the symbolism of the disappearing world of the Jewish shtetl is always clearly manifested, which was and remains a source of inspiration for them. The work of Yudovin himself also influenced the artists of the Vitebsk school. Their masterly combination of generality with documentary concreteness was further developed by Yudovin, and the specific details in his works only emphasize the deep symbolism of the works.

Book graphics occupied an important place in Yudovin's work, and in the 1930s-1940s, book illustrations began to occupy the main place in his work. Yudovin worked mainly in the technique of woodcut and linoleum engraving. During this period, his work rose to a new level - he learned to convey the illusion of depth with much more meager means, without using unusual angles, extremely high horizons and a highly distorted perspective.

Lyon Feuchtwanger highly appreciated Yudovin's talent as an illustrator, writing to him in a personal letter: «I sincerely thank you for your letter and especially for the wonderful gift you have made - for your prints. I have already written to the publishing house, how extremely talented I consider your prints ... ».

Yudovin's works are kept in the State Tretyakov Gallery, State Russian Museum, State Museum of Fine Arts named after A.S. Pushkin, in the Russian Ethnographic Museum, in the National Art Museum of the Republic of Belarus, in the Art Museum of Vitebsk, in Israel, in private collections. 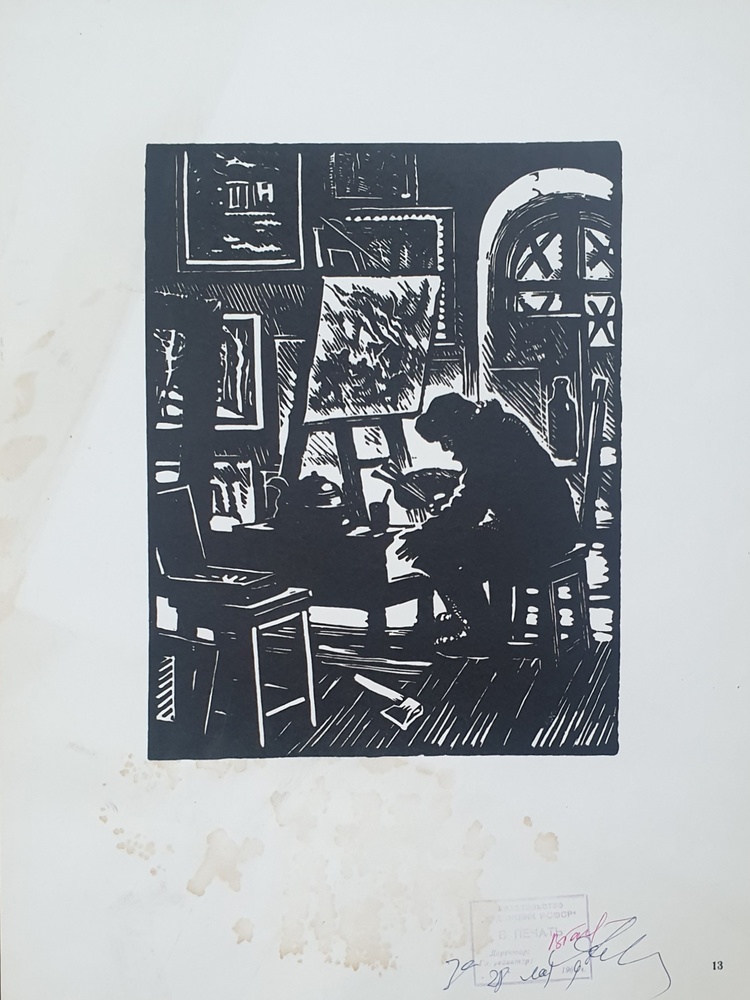