Bryukhanov Dmitry Afanasyevich (1915-1992) - graphic artist, illustrator, member of the Union of Artists of the USSR, Honored Artist of the RSFSR (1965), the first chairman of the Magadan branch of the Union of Artists of the RSFSR. Dmitry Afanasyevich Bryukhanov was born on October 20, 1915 at the Shumikha station of the Kamennaya Volost of the Chelyabinsk district of the Orenburg province, now a city, the administrative center of the Shumikha district of the Kurgan region. Father, Afanasy Nikolaevich Bryukhanov, was an employee of an insurance company, mother, Praskovya Fedorovna, a teacher of a public school. When he was eight years old, his family moved to Novosibirsk. At school, the boy's talent in the field of drawing was noticed by the teacher Yakov Safonov, a graduate of the St. Petersburg Academy of Arts. Under the guidance of Safonov, Dmitry Bryukhanov, even before leaving school, began to study at the Proletkult art studio at the graphic department. The works of the young artist were exhibited at the exhibitions of the Novosibirsk branch of Proletkult.

After graduating from school, in 1931, he entered the evening department of the Siberian Planning Institute. At the same time he worked as an artist in the Novosibirsk Regional House of Arts («Kraydisk»). In the summer of 1932, together with the propaganda team of Krydisk, he made a trip along the Ob, during which the artist made many studies and sketches, which he later used in further work. In the agitation brigade, he designed the wall newspaper «Crocodile on the Putin», prepared the scenery for performances and even acted in them as an actor. Since 1933 Dmitry Bryukhanov became an artist in the editorial office of the youth newspaper Bolshevik Smena. Also, drawings and caricatures of his work appeared on the pages of the magazine «Siberian Lights», newspapers «Soviet Siberia» and «Rural Truth». He was arrested on false charges and sentenced to 10 years in labor camps. On June 15, 1937, he arrived in Magadan on the Kulu steamer.

After his release in September 1948, he worked in several regional geological exploration departments of Dalstroy, and then returned to work as an artist. Rehabilitated. In 1956, the book «Tales of the Peoples of the North-East» with his illustrations was published, which became the beginning of work in the field of book illustration. From the very first creative steps Dmitry Bryukhanov was attracted by fabulous and fantastic motives.
This was reflected in his active work in book graphics, especially when creating illustrations for fairy tales.

Art critic V.I.Kandyba in his essay on the history of the fine arts of the Magadan region writes:

«The main achievements of the artist are connected with book graphics. Linocut, black ink, gouache - these are the techniques of his work. A clear selection - only necessary and nothing superfluous, the ascetic contrast of black and white is his favorite pictorial technique.»

He was a delegate to the Third Congress of Artists of the USSR (1968), chairman of the regional art council, a member of the art councils of the Magadan book publishing house and the Magadan art-production workshops of the Art Fund of the RSFSR, was a permanent member of the exhibition committees of zonal and regional exhibitions. His works were published in the Magadan literary and artistic almanac «In the Far North». In 1960, the works of D. Bryukhanov and M. M. Rakitin, Magadan artists were first presented at the exhibition «Soviet Russia» in Moscow. In 1965 he was awarded the title of Honored Artist of the RSFSR.

Mastering the technique of linocut, as well as linocut with watercolors, influenced the compositional techniques of Dmitry Bryukhanov, defining the characteristic appearance of his work.
One of the early works of D. Bryukhanov in the field of book graphics - the book «Tales of the Peoples of the North-East» (Magadan: Magadan Book Publishing House, 1956) - was presented at the 1957 International Book Exhibition in Leipzig, where she received an exhibition diploma. This was followed by the books Northern Animal Tales (1957), Eskimo Tales (1958), Even Folklore (1958), Chauchu Tales (1959) and others.
Many works reflect the motives of the folklore of the peoples of the north-east of Russia: Chukchi, Yakuts, Evens, Eskimos. In addition to folklore works, he also illustrated books by author's fairy tales (Odoevsky, Pogorelsky, Andersen, Pushkin, Perrot, A. Tolstoy, J. Harris) and other literary works. The artist actively participated in the preparation of publications in the Chukchi and Even languages. With illustrations by Dmitry Bryukhanov, an autobiography novel by Yuri Rytkheu «The Time of Snow Melting» was published - the first novel in the Chukchi language. Dmitry Bryukhanov also illustrated other books by Rytkheu, both in the original language and in Russian translation. Dmitry Bryukhanov also designed the book of the Chukchi poet Viktor Kelgut «My Chukotka» (1958), the poet Tynetegin «Tales of the Chauchu» (1959, 1982), «Lymnylte Eygyskykin» («Chukotka tales», 1963), translations of the works of A. Tolstoy into the Chukchi language «The Golden Key, or the Adventures of Buratino» (1959), V. Mayakovsky «What is good and what is bad» (1980), Mansi writer Yuvan Shestalov «Blue wind of touch» (1970). Among the books in the Even language, Dmitry Bryukhanov illustrated the book by the founder of the Even literature Nikolai Tarabukin «My Life» (1959, 1982). Acquaintance with the cultures of the peoples of the North was reflected not only in the images that appeared in the works of Dmitry Bryukhanov, but also in the methods of his work. Studying the traditional Chukchi carving and engraving on the walrus tusk (the so-called Chukchi carved bone), the artist noted the characteristic techniques of the Chukchi craftsmen and then applied them himself. Among such techniques: construction of a general narrative composition from separate fragments, perspective according to the principle «what's next, then higher», circular composition, a slow, but internally tense rhythm of the drawing. The artist used these techniques for the first time in the second version of illustrations for the author's biographical novel Rytkheu (1960). At the same time, while working on the publication of Russian folk tales in the Chukchi language (1961), the artist uses typical techniques of Russian art, including ornament from folk costumes.
And in the type design he uses elements of Old Russian ligature. The books illustrated by him were published in regional publishing houses (Magadan, Rostov-on-Don), as well as in the capital («Malysh»). In total, the artist has designed more than 60 books, many of which have been reprinted several times.

In addition to book graphics, he worked in other types of fine arts. In the late 1950s - early 1960s, the artist, commissioned by the Magadan Regional Museum of Local Lore, created a series of graphic drawings dedicated to the history of Chukotka. In easel graphics he owns the works «Hunting for Walruses», «Gathering Roots», «Shaman», «Northern Dance», «Running Deer», «Northern Lights», «Chukotka Fairy Tale» and others.
The artist also created a number of sketches for walrus tusk carving on folklore subjects. They were approved by the masters of the Uelen bone carving workshop named after Vukola, and the famous carver Tukkay created a series of sculptures on their basis. 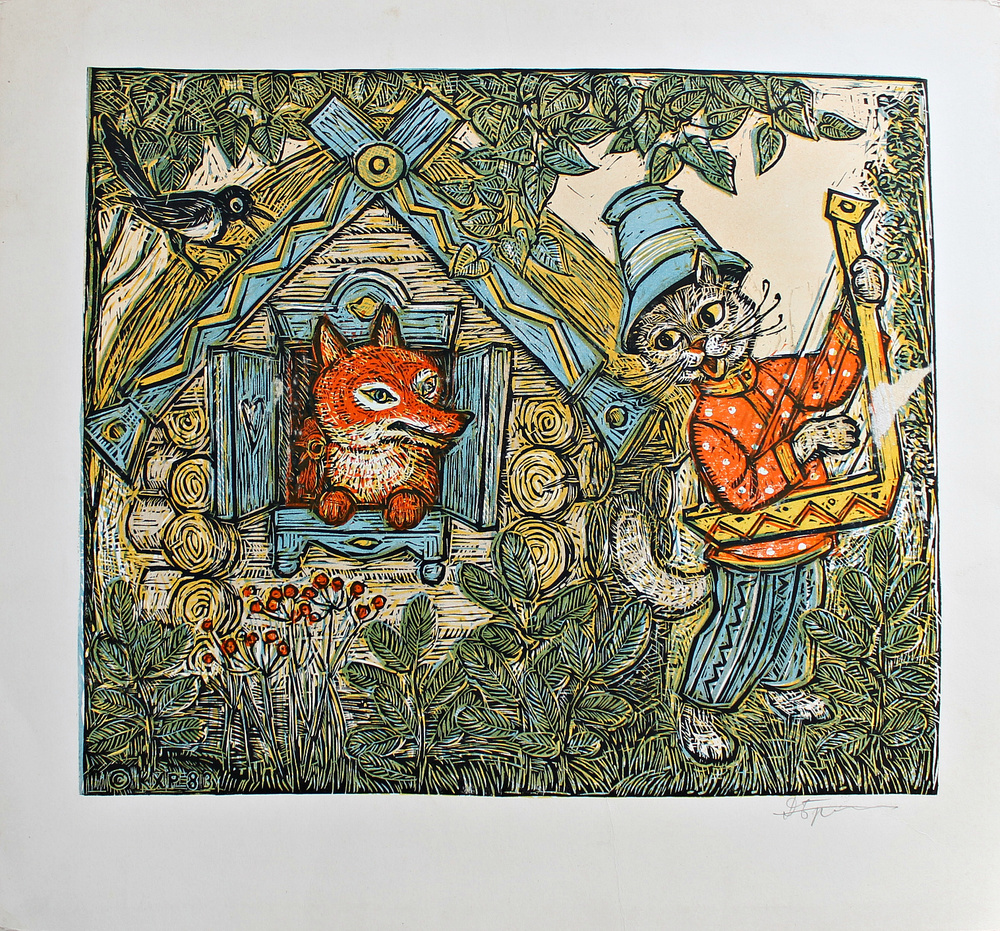 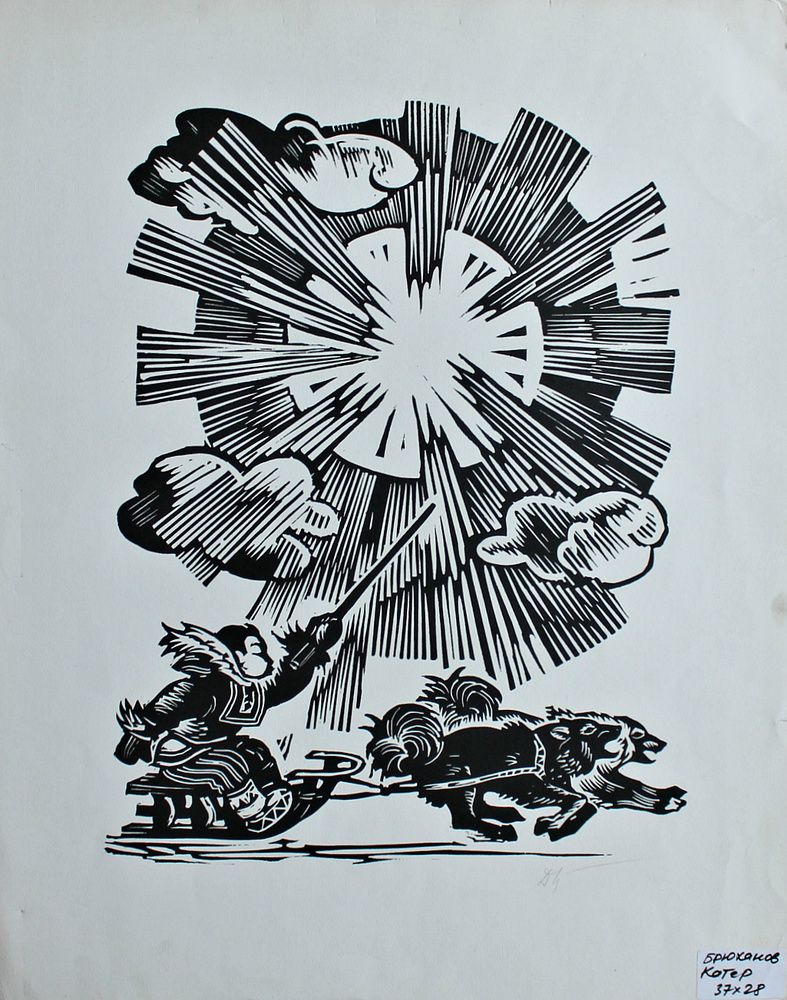 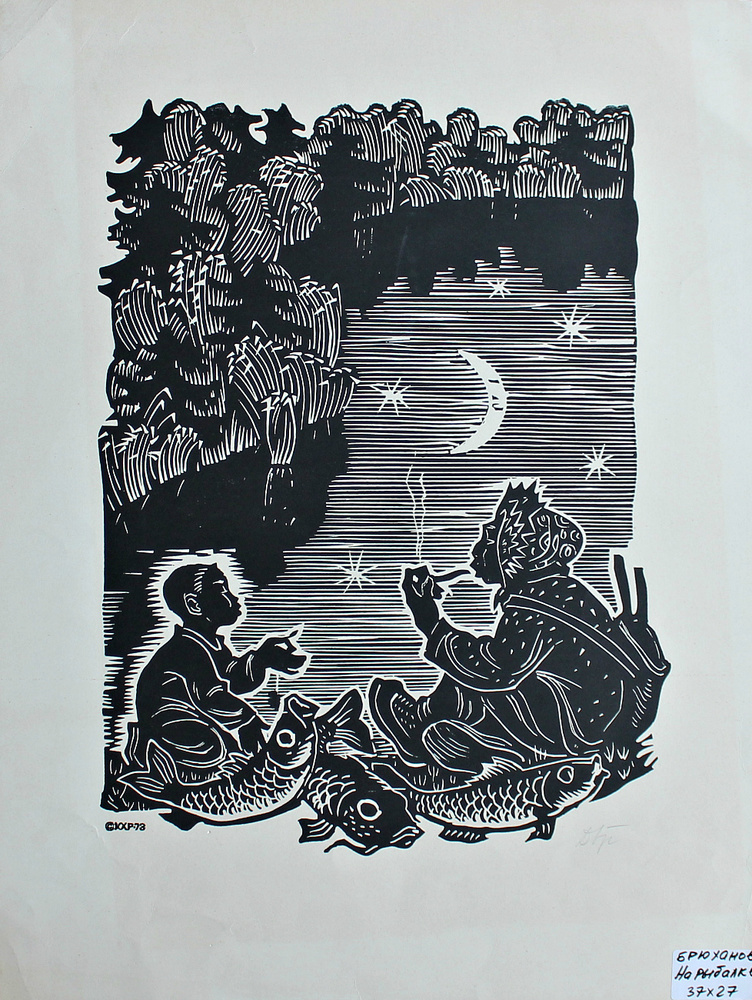 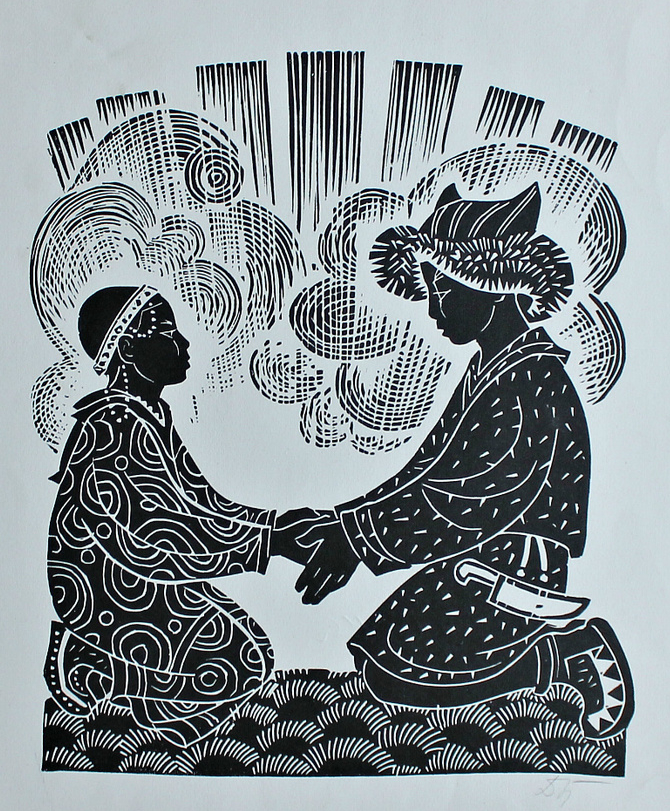 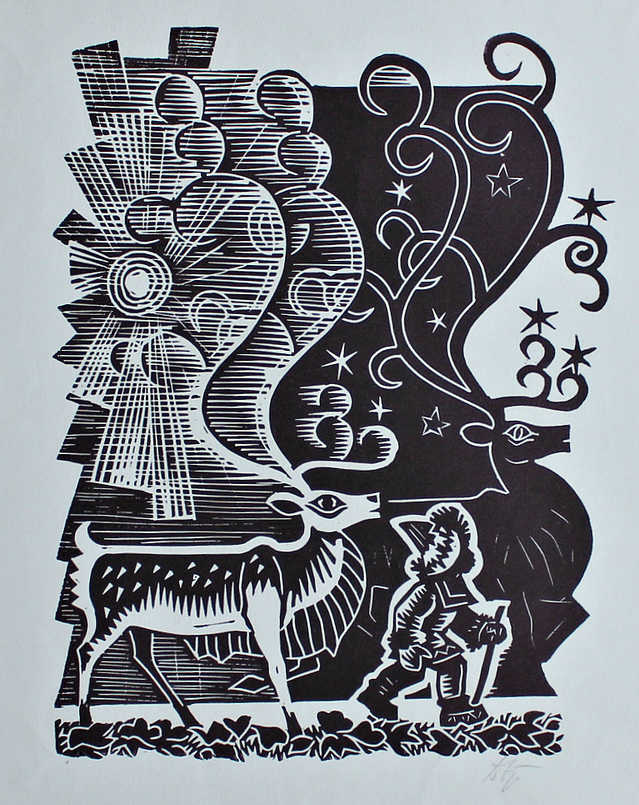 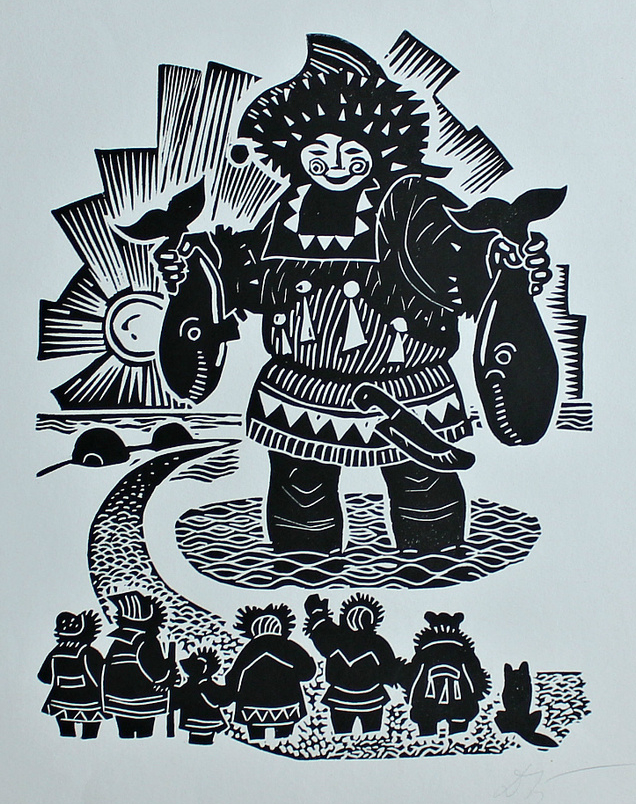 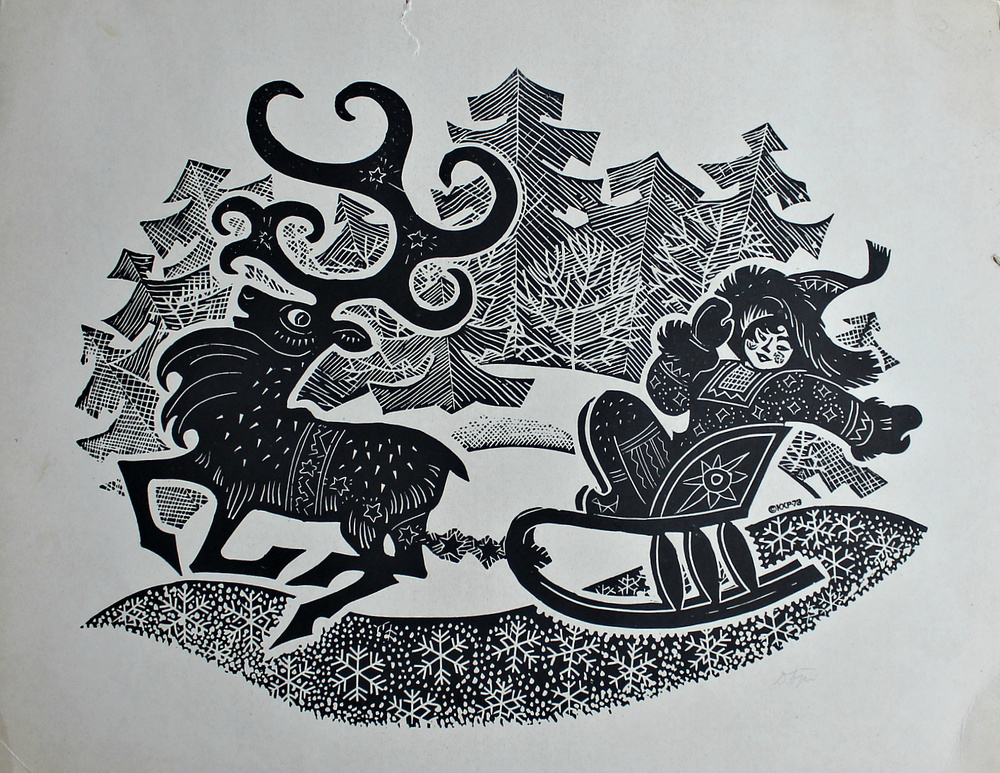 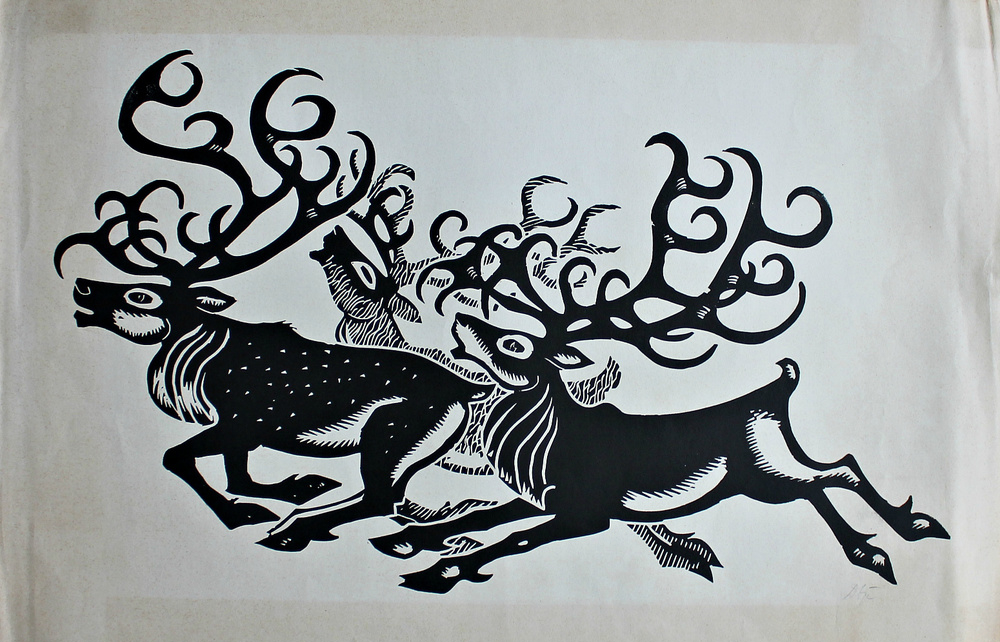 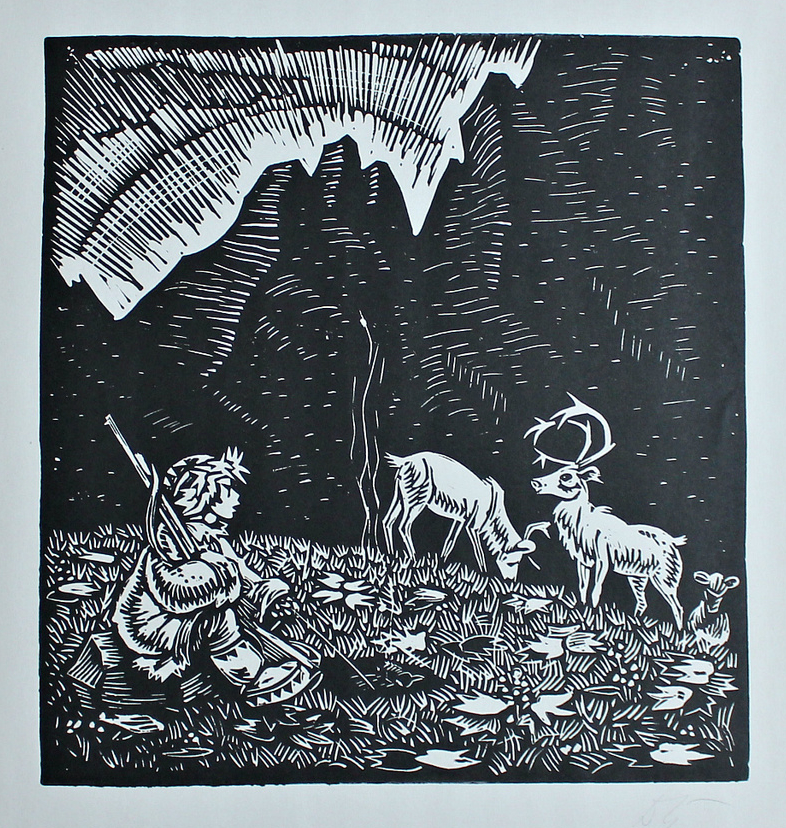