Natalya Sergeevna Goncharova (June 21 [July 3] 1881, the village of Ladyzhino (according to other sources, the village of Nagaevo), Tula province - October 17, 1962, Paris) - Russian avant-garde artist, graphic artist, stage designer. The representative of luchism. Wife of Mikhail Larionov. Goncharova’s childhood passed in the Tula province, where her father owned several villages and estates: Ladyzhino, Nagaevo, the village of Luzhny. After living for the first ten years in the estates of her father, Goncharova later regretted having to live and work in large cities, while she would prefer rural life. While traveling in Russia, she also showed a greater interest in exploring villages than cities. In 1891 (according to other sources in 1892) he moved to Moscow with his family. In 1898 she graduated from the IV female gymnasium with a silver medal. In 1900, he tried himself on medical courses, but throws them after three days. Later, in conversations with Goncharova, M. Tsvetaeva writes: «I could not bear the masculine appearance of female medical students». In the same year, following a close friend, she studied for six months at the history department of the Higher Women's Courses.

In 1901, as a free student, he entered the Moscow School of Painting, Sculpture and Architecture in the sculpture department, in the class of the sculptor-impressionist P. P. Trubetskoy. Her other teacher is S. M. Volnukhin. According to one version, in the same year he meets his future husband M.F. Larionov. However, according to another version, their acquaintance could have happened a year earlier: in the lists of Larionov’s works his portraits painted by Goncharova in 1900 are mentioned.

In 1903 he made a trip to the Crimea and Tiraspol. In Tiraspol, Goncharova draws posters for an agricultural exhibition, which takes place in a building built by her father. From the trip, Goncharova returns with watercolors and pastels made in the impressionist technique, which she is fond of under the influence of Larionov. The brought paintings are acquired by collectors of contemporary art A.I. Morozov, N.P. Ryabushinsky. In the same year, interrupts his studies due to health conditions. Returns to the school in 1904 and goes to the painting workshop, where K. A. Korovin becomes her teacher. The preference for painting sculpture is often associated with the influence of Larionov.

However, Goncharova continues to engage in sculpture. Twice her works are marked by medals: in 1904 she received a small silver medal for animalistic sculptural sketches, she was awarded the second medal for sculpture in 1907. In 1909, Goncharova stopped paying tuition, and she was expelled from school. Since 1906, Goncharova has been more and more involved in painting. In Paris, she visits a retrospective of Paul Gauguin and is fond of Fauvism, moving away from impressionism. Soon she tries herself in many other areas of painting: she is fond of cubism and primitivism. At the same time, Goncharova actively exhibited her works, taking part in all significant exhibitions of contemporary art in Russia, as well as in some European exhibitions.

The first experience of theatrical work dates back to 1909: Goncharova prepares sketches of sets and costumes for the production of «The Weddings of Zobeide» by Hugo von Hoffmannsthal, carried out in the private studio of Konstantin Kracht. He also tries himself in arts and crafts, designing the sculptural friezes of some Moscow mansions and developing wallpaper designs.

On March 24, 1910, at the premises of the literary and artistic circle of the Society for Free Aesthetics, Goncharova organized his first solo exhibition, which presented 22 paintings. The exhibition lasted only one day: because of the painting “The Model (on a blue background)” Goncharova was accused of pornography, several works were confiscated. Soon, the court acquitted the artist. In 1912 he took part in futuristic walks organized by Larionov with painted faces around Moscow. Starts to illustrate books of futurists. On the initiative of A. Kruchenyh, lithographed postcards with drawings by Goncharova are published.

In 1914, having accepted the invitation of Sergei Diaghilev to work as an artist for the Russian seasons, Goncharova and her husband arrived in France. The first work in the Diaghilev troupe was the set design of the opera-ballet The Golden Cockerel, after the success of the first shows of which in Paris and London Diaghilev continued to collaborate with the artist. First, the couple lived in Switzerland, in 1916 - in Paris, spent the winter and spring of 1917 in Rome. Finally settled in Paris in May 1919.

In the early 1920s, Goncharova and Larionov actively collaborated with Diaghilev, regularly exhibited in the Paris galleries Autumn Salon and Independent Salon. Goncharova continued to engage in book illustration, painting, teaching, designed Parisian balls, but her fame gradually faded away. The first foreign personal exhibition of Goncharova opened in June 1931. In 1938, he and Mikhail Larionov accepted French citizenship. In 1956, Goncharova and Larionov finally officially registered their marriage.

In the 1940s and 1950s, the couple lived in relative poverty and lack of demand, but in the second half of the 1950s, their art again attracted attention. In 1961, a major retrospective of the works of Larionov and Goncharova was organized by the British Council of Arts in London. She died in Paris on October 17, 1962. She was buried in a cemetery in Ivry-sur-Seine in Paris. After her death, the Museum of Modern Art (Paris) devoted a major retrospective to her and Larionov. 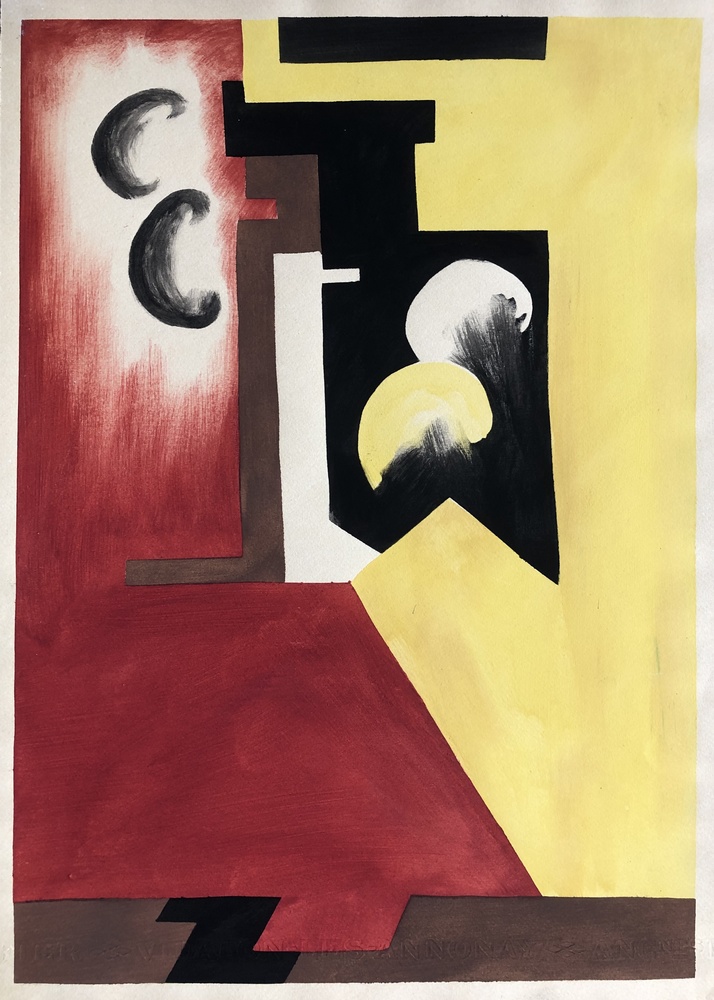