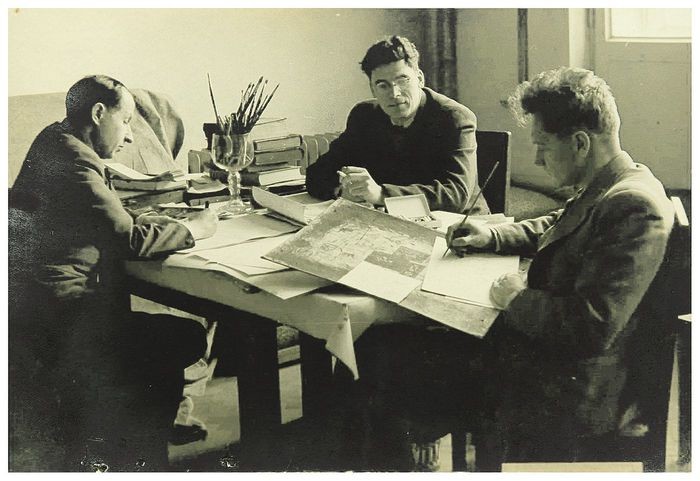 Kukryniksy is a creative team of Soviet graphic artists and painters, which included full members of the Academy of Arts of the USSR (1947), people's artists of the USSR (1958), Heroes of Socialist Labor Mikhail Kupriyanov (1903-1991), Porfiry Krylov (1902-1990) and Nikolai Sokolov (1903-2000). The pseudonym «Kukryniksy» is composed of the first syllables of the surnames KUpriyanov and KRYlov, as well as the first three letters of the name and first letter of the surname Nicholas Sokolov. A similar example of compiling a pseudonym is the pseudonym of the creative collective of Soviet writers «Grivadiy Gorpozhaks», however, for visual art this is a unique phenomenon in history. Three artists worked by the method of collective creativity. The greatest fame was brought to them by numerous skillfully executed caricatures and cartoons, as well as book illustrations created in a characteristic caricature style.

The joint work of the Kukryniksy began in his student years at the Higher art and technical workshops. At the Moscow Higher State Artistic and Technical Workshops, artists gathered from different parts of the Soviet Union. Kupriyanov from Kazan, Krylov from Tula, Sokolov from Rybinsk. In 1922, Kupriyanov and Krylov met and began to work together in the wall newspaper of workshops like Kukry and Krykup. At this time, Sokolov, while still living in Rybinsk, affixed Nyx on his drawings. In 1924, he joined Kupriyanov and Krylov, and in the wall newspaper they already worked three together as Kukryniksy.

A significant moment in the work was the military poster «Ruthlessly Crush and Destroy the Enemy!». He appeared on the June streets of Moscow one of the first - immediately after the attack of Nazi Germany on the USSR. The Kukryniksy went through the whole war: their leaflets accompanied Soviet soldiers all the way to Berlin. In addition, the TASS Windows poster cycle was very popular.

They became classics of the Soviet political caricature, which they understood as an instrument of struggle against a political enemy, and completely did not recognize other trends in art and caricature, which manifested themselves fully in the first place in the new format of Literary Newspaper (humor department, Club of 12 Chairs) ) Their political cartoons, often published in the newspaper Pravda, belong to the best examples of this genre («Ticks in pincers», «I lost a ring ...», «Under the Eagle, I responded, in Rome I responded», «Wall-haircut», «Lioness share», a series of drawings «Arsonists of war», etc.). The collective owns numerous political posters («Transformation of the Fritz», «Peoples warn», etc.). Kukryniksy are also known as painters and masters of easel drawing. They are the authors of the paintings «Morning», «Tanya», «German Flight from Novgorod», «The End» (1947-1948), «Old Masters» (1936-1937). They made drawings in pastel - «I. V. Stalin and V. M. Molotov», «I. V. Stalin in Kureyka», «Barricades on Presnya in 1905», «Chkalov on the island of Udd» and others.

Like all political posters and cartoons in the USSR, the work of Kukryniksy served to propagate the current policies of the Soviet leadership. Caricatures of Trotsky’s «fascist mercenary» (1937), of those accused of the «Parallel Anti-Soviet Trotskyist Center» trial (placed on the cover of the Crocodile magazine, No. 4 for 1937), and of «pest doctors» (January 1953) can be noted.

After the end of World War II, the Kukryniksy continued to address political issues in their work, which became the basis for the Cold War series of works (1945 - late 80s). In particular, the Marshall Plan was portrayed by the collective in 1949 cartoons.

Team members also worked separately - in the field of portraiture and landscape. 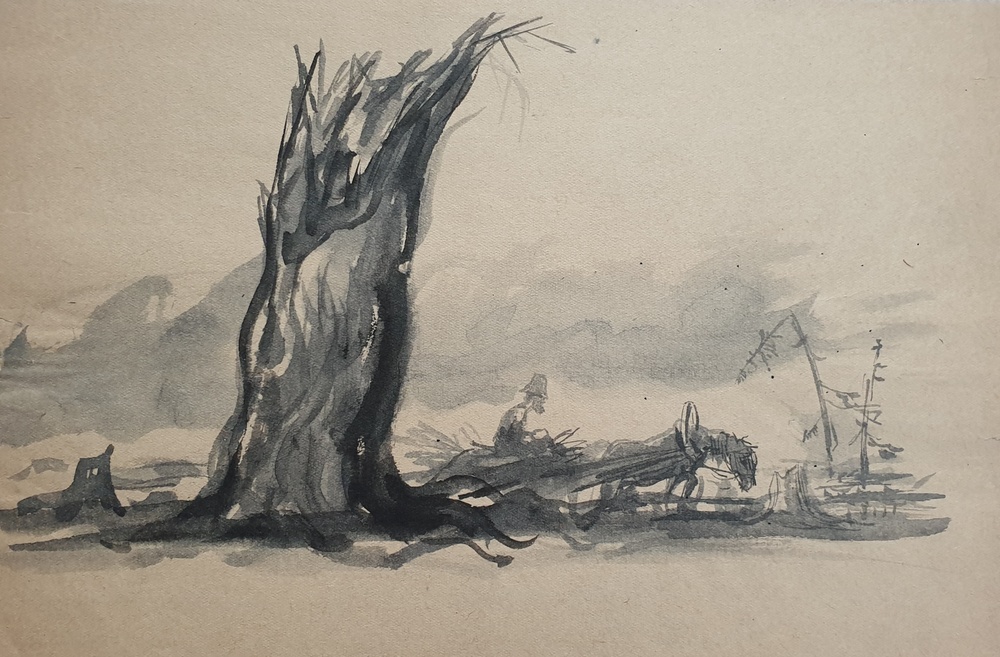 lot 32. «Sketch of an illustration for «The History of a City»»