Lapshin Nikolai Fedorovich (1891-1942) - Russian and Soviet painter, graphic artist, teacher, book illustrator, member of the Leningrad Union of Artists, theater artist, author of articles on art. One of the representatives of the Leningrad landscape school. Nikolai Fyodorovich Lapshin was born in St. Petersburg on January 29 (February 10), 1891. Cousin - Nikolai Petrovich Yankin (1887 - not earlier than summer 1942), Russian and Soviet artist. Art education of N.F. Lapshin was not systematic: he studied at the elementary school of the Central School of Technical Drawing of Baron Stieglitz (1900), at the Polytechnic Institute (1909), at the drawing school of the Society for the Encouragement of Arts under I. Bilibin, A. Rylov, N. Himons (1912-1915), in the private studios of J. Tsionglinsky (1911-1912) and M. Bernstein (1913-1914).

Participated in the First World War, was wounded. In 1913 he met M. Larionov and N. Goncharova in Moscow, under their influence he turned to the study of Russian icon painting and folk art. Together with N. Goncharova, he is engaged in painting the scenery for the production of N. Rimsky-Korsakov's opera The Golden Cockerel. The first exhibition in which Lapshin took part was «The Target» (1913). At the exhibition «No. 4. Futurists, Rayonists, Primitives» in 1913 Lapshin (under the name Lopatin) exhibited several paintings inspired by M. Larionov's «Rayonism». He was a member of the Bloodless Murder group created in 1914. Member of associations: «Union of Youth» (1917-1919), ALT - Association of the latest trends (1922-1923), the Society of Individualist Artists (since 1922), «4 Arts» (since 1926). In the 1920s. acted as an art critic. In 1922 he worked at the Decorative Institute. In 1920-1921. headed a section in the Department of Fine Arts of the People's Commissariat for Education.

The main stage of the artist's work begins in the 1920s. In 1921-1923. Lapshin worked as assistant director of the Museum of Artistic Culture. Many positions in the collecting, exhibition and other practical activities of the Museum of Artistic Culture were developed jointly by N.N.Punin and N.F. Lapshin. On the basis of this museum in 1923-1926. the State Institute of Artistic Culture was created, headed by K. S. Malevich. The rapprochement with the artists of the avant-garde had a formative effect on Lapshin, giving his work a constant striving for something new, an attraction to heightened expressiveness of artistic expression; these qualities define Lapshin as an artist. He taught at the Artistic and Technical Workshops (1920-1922), at the Leningrad Construction College (1931-1933), at the Leningrad Institute of Utilities Engineers (1923), at the Graphic Arts (1929-1941) and at the Faculty of Architecture of the Higher Artistic and Technical Workshops - Leningrad Institute of Painting, Sculpture and Architecture of the All-Russian Academy of Arts (since 1933). From 1928 to 1935 he was the art editor of the «Hedgehog» magazine. He also worked in the magazines «Life of Art», «Robinson» and others. In book graphics, N.F. Lapshin became one of the pioneers of illustrating «cognitive» (popular science) books for middle school age, proving by his work that the authors of the text and illustrations are two authors of one book. Lapshin in book graphics since the mid-1920s. and illustrated books by various authors, including N. Zabolotsky (under the pseudonym Y. Miller). Most often the name Lapshin in the children's book is associated with the name of M. Ilyin. Some of their co-written books (at least four) were published in the 1930s. in USA. In total, N.F. Lapshin illustrated over 50 books for children.

Lapshin illustrated books with the help of tiny remarks, characterized by laconicism and sharp expressiveness. As a co-author, together with Osip Mandelstam, he worked on the book Shary (L: GIZ, 1926). The most famous book illustrated by N. Lapshin and won the International Prize at the competition of children's book artists in the USA: «Marco Polo's Travels», New York, 1934. In addition to book and easel graphics, Nikolai Lapshin was engaged in painting, applied art, and designed performances in theaters ... In the last years of his life he worked on a series of views of Leningrad. Among them - «First Snow» (1934, State Russian Museum), «Crossing the Neva» (1935, State Russian Museum). The most significant period of Lapshin's work in easel graphics is considered to be a series of watercolors made between 1936 and 1941. He was married to Vera Vasilievna Spekhina (1894-24 January 1942, died during the blockade). He lived in St. Petersburg, on the Moika embankment, 64, apt. 32. In the same communal apartment lived a teenager Richard Vasmi, who took drawing lessons from Lapshin. Nikolai Fedorovich Lapshin died of starvation in besieged Leningrad, on February 24, 1942.

In the last months of his life he wrote memoirs published in 2005. Lapshin is an artist of St. Petersburg-Petrograd-Leningrad, in this city he was born and lived all his life. In the city landscapes of N.F. Lapshin, as is generally characteristic of St. Petersburg and Leningrad art, the rational - strict professional calculation and the artist's inner self-discipline - always accompanies the emotional. Lapshin's painting system is based on the following principles: verified constructive structure, strict selection of the components of the chosen motive, and laconicism of the coloristic solution, with amazing accuracy falling into the nature of time and place. The principle of his work with a landscape is work on representation, which allows him to achieve the integrity of the work from direct observations of nature by the power of generalizing artistic thinking. It was the commonality of these principles, shared by Lapshin with artists close to him in spirit, that became the basis of such a phenomenon as the Leningrad school of painting, sometimes called the Leningrad school of landscape painting: «a kind of chamber landscape school that emerged in Leningrad ... Numerous traditions ... influenced the formation of this school». Most of these artists were united by their «declared orientation towards French painting», mainly by A. Mark, A. Matisse, R. Dufy and other artists, and training with A. E. Karev and K. S. Petrov-Vodkin is often mentioned, and also training and work with V. V. Lebedev. The Leningrad school of painting unites a circle of masters, whose work (in the method of work and in the perception of the world) had a number of common features, in aggregate, sufficient to be called a school, and N.F. Lapshin is considered a key figure in it.

In a sense, the Leningrad school of painting was opposed to the painting of Moscow artists associated with the traditions of the Union of Russian Artists and the Jack of Diamonds. G.G. Pospelov notes the «luminosity of color» common to Leningrad painting schools. L. V. Mochalov notes that these artists have coloristic restraint and watercolor transparency of color, work with tone. The general characteristics for NF Lapshin and other artists of many researchers are the characteristics of the Leningrad school: simplicity of execution; the breadth of the scenic reception; principled use of «quick letter»; mandatory preservation of the plane of the picture; limitation in color; the importance of the silhouette; the use of transparent, silvery, and soft tonal scales and blurred outlines of objects; striving to work within certain boundaries or «canons»; the accuracy of displaying the proportions of the architecture; use of graphic elements in painting. The principle of work of these artists in their chosen genre of landscape is defined by G. N. Traugot: «The landscape essentially includes the worldview of the era». The landscape was usually created from memory, sometimes it was the same constantly repeating motive, often the view from the same window. N.F. Lapshin constantly painted landscapes from the window of his apartment on the Moika Embankment; in the same way, for the most part, the landscape painters of the Leningrad school constantly painted the view from the window of their studio - A. E. Karev, A. I. Rusakov, A. S. Vedernikov, and V. V. Lebedev. L.V. Mochalov, having initially defined the Leningrad school of painting as predominantly landscape, repeatedly in his articles from 1976 to 2005, emphasizes that it is still wrong to define the Leningrad school of painting as a landscape one, because the school's artists worked in a variety of genres. The tradition of the Leningrad school since the late 1940s. also supported by the artists A. D. Arefiev and Richard Vasmi, who was directly influenced by N. F. Lapshin. 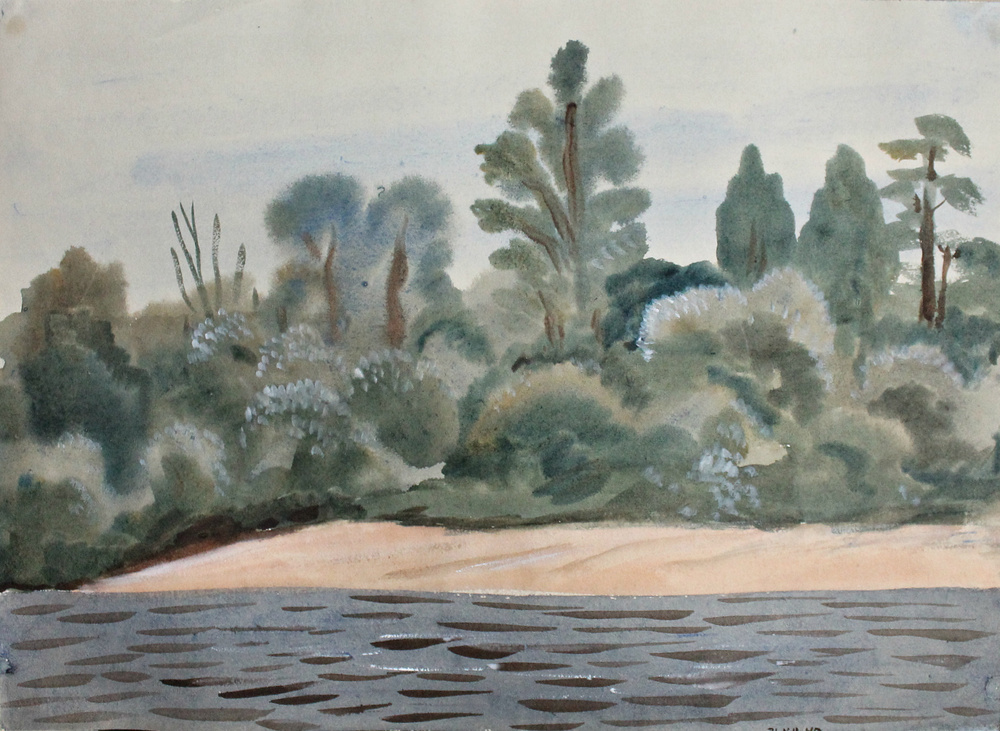