Mishin Valery Andreevich is a modern St. Petersburg artist who created his own original style in art. His school is the tradition of modernism, his creative method is the knowledge of the world and his own intuition. Valery Mishin is a wonderful graphic artist, painter, he is engaged in book illustration, bookplate, creates art objects. He is a member of the Union of Artists of Russia, a member of the International Federation of Artists UNESCO, a member of the International Federation of Russian Writers.

V. Mishin was born in 1939 in Simferopol, after graduating from the Sverdlovsk art school, entered the Leningrad Higher Art School named after V. I. Mukhina at the department of monumental and decorative art. During his student years, he walked around St. Petersburg, inspired by the beauty of the embankments and palaces of the northern capital. After graduation, he plunged into the romance of the artistic life of the northern capital. Mishin got acquainted with famous artistic personalities, poets, painters, graphic artists, took part in apartment exhibitions and readings. He was inspired by freedom of creativity and self-expression, devoid of conventions, a reference to commercial success and social standards. Thanks to the artist's extraordinary talent and fruitful environment, his unique artistic language, the style of Valery Mishin's «Rerealism», has developed. V. Mishin, like many of his friends, artists of his circle and generation, was keenly interested in world contemporary art. Sometimes Western magazines, photographs and stories of those who were lucky enough to visit the West, America or Europe served as a source of new information. V. Mishin belongs to the generation of the sixties, which is a vivid artistic phenomenon of modern culture, which gave the world artists, poets, musicians, and writers. V. Milin was friends with many contemporary poets - K. Kuzminsky, E. Pazukhin, V. Krivulin, O. Okhapkin and others. V. Mishin himself wrote poems and stories that were not intended for the official press, but rather for the then popular samizdat. His heroes escaped from the very atmosphere of the reality around him, from his philosophical reflections on life. All in the same 1960s V. Mishin plunged deeper into the culture of the underground, more and more actively participates in exhibitions, joins the «Group of Eight», which united the artists of the «left» Union of Artists. V. Mishin's creativity is multifaceted.

He entered the history of St. Petersburg art as an author, remembered for his originality, of several graphic series of works. By 1975, a cycle dedicated to A.S. Pushkin appeared, which did not pass the censorship of the Soviet exhibition committee because of the free presentation of the topic and because of the discrepancy between its hero and the traditional image of the great poet. Mishin creates his own poetic world of objects and spiritualized characters living within the picture space. In his works, the artist almost always improvises, his look at the characters is ironic and philosophically meaningful. His attention to detail is meticulous and essential to the implementation of the design. Interesting is his experience in creating a series of mystical lithographs, when he turns to the artistic heritage of the Middle Ages or the philosophy of Bruegel and Bosch. Images of prophets and knights appear in his work, the theme of «tired death» and «cross» (1975-1978) arises.

The most famous series of V. Mishin - «Men», in the style of urban folklore. This theme arose in Mishin's student years, but over the years it has received an interesting development. In his works, the lyrical motive argues with the grotesque. The artist takes topical plots from real life, creating anecdotal situations and endowing the characters with bizarre features: deliberately enlarges the heads of the characters and makes expressive eyes. Every detail and figure is worked out to the smallest detail, everything is done with an excellent knowledge of nature and winning composition.

V. Mishin's works are distinguished by their mastery of execution, inexhaustible creative imagination and the unique originality of the plot. V. Mishin's paintings are of particular interest to the modern viewer. If in graphics he is scrupulously accurate in drawing, then in his painting he gives free rein to color, texture and compositional experiments. Mishin creates his expressive characters using bright colors and naive art style. Despite the ironic attitude to images, his works are imbued with a philosophical meaning. Valery Mishin's work is always relevant. The artist has an excellent sense of the time and, without changing his natural intuition, creates amazingly integral and significant works that occupy a worthy place in the history of Russian art. 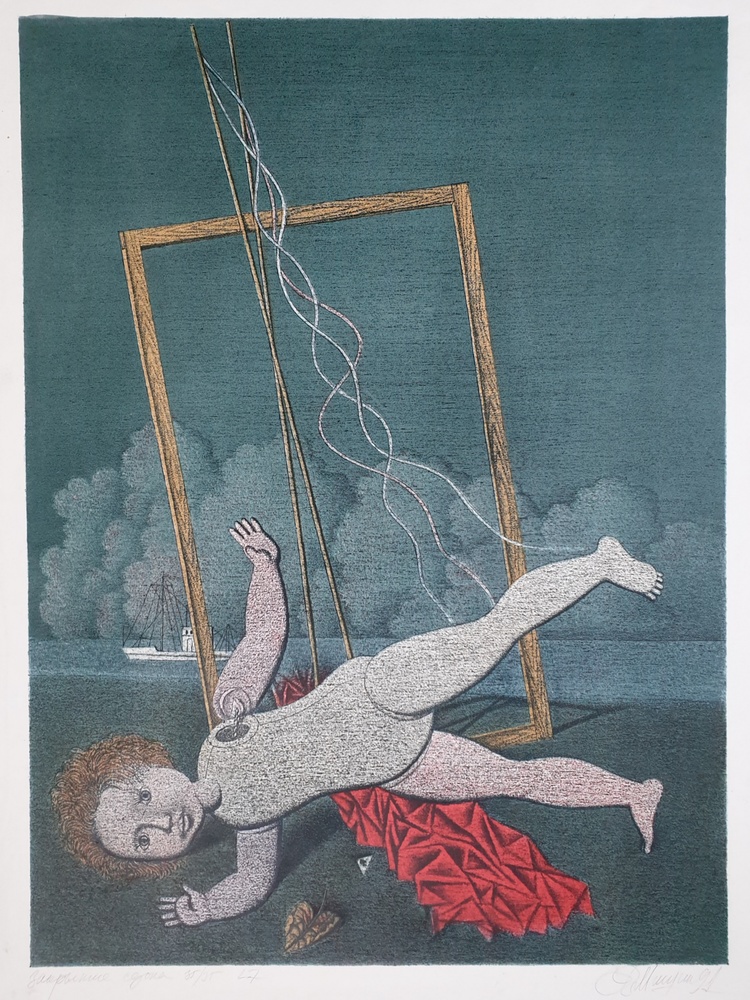