Timkina Tatyana Evgenievna (born in 1961) - graphic artist, watercolorist, member of the Union of Artists of Russia, Honored Artist of Russia. Tatyana Evgenievna was born on March 10, 1961 in Kirov in the family of a seamstress and a computer specialist. From the age of 8 she studied watercolors in the studio of the graphic artist S.G. Ichetovkin in the art studio of the House of Pioneers on Commune Street (in the former bishop's house). Graduated from the Kirov Art School, workshop of P.S. Vershigorov (1987, teachers P. Vershigorov, E. Grishin). Then she studied at an art school (in the same group with Volodya Mullin, Andrei Drachenkov, Lada Ardimasova) and willingly took up illustrations for the poems of individual vers librers - for the poem «Kolobok», for the cycle «Polushtof in Korean style». These drawings in ink and pen remained on the pages of samizdat of the late 1980s. Then she went to Moscow, to the Surikov Institute, after the first year she transferred to her beloved Peter since childhood - to the Repin Academic Institute (1989-1995). Thesis in the All-Russian Academy of Arts - design and illustrations of the novel by A.S. Pushkin's "Arap of Peter the Great" and a series of gun still lifes, the score is excellent. The training took place at the graphic faculty. Awarded the qualification of a graphic artist. Teacher Andrey Alekseevich Pakhomov.

The artist also studied in the studio of I.V. Balakova, a follower of the Chistyakov-Savinsky watercolor school, which in turn was a bright continuer of the traditions of the Italian school of watercolors, a brilliant representative of which was the maestro Mariani Fortuny (19th century). After graduating from the St. Petersburg Academic Institute of Painting, Sculpture and Architecture named after I.E. Repin, she returned to her hometown and immediately plunged into the creative life of the Herzenka art center. Among the artist's works in book graphics is the design of the collection of poems by Galina Kustenko «Amethyst Light» (1997). Over the years of cooperation, Tatyana Evgenievna has held five personal art exhibitions here, participated in several cultural and educational projects. For example, within the framework of the project «Music of the Bach Epoch» (2002), the art center hosted a presentation of a series of her watercolors «Hoffmaniada. New works in book graphics». The artist often turns to themes of classical literature in her work. and tragedies are filled with deep philosophical meaning, personal attitude.As a member of the board of the Kirov regional organization of the Union of Artists of Russia, T.E. Timkina participates in the holding of anniversary and candidate exhibitions of the art center, in presentations of books dedicated to Vyatka artists.Tatiana Evgenievna often attends musical evenings and concerts, is a guest of literary events.

Tatyana Evgenievna is a participant of international, all-Russian, interregional, regional, city exhibitions. At the zonal exhibition «Russian North-1998» in Kirov, her paintings aroused the amazement of colleagues from Moscow: who writes this with you in such a unique technique? - and Timkina was immediately admitted to the Union of Artists. Dozens of personal exhibitions of T.E. Timkina were held in different cities of Russia and Europe. High professional achievements of Tatyana Evgenievna were marked with silver and gold medals of the Union of Artists of Russia and a silver medal of the Foundation for Assistance to the Development of National Culture and Art, gratitude of the Russian Academy of Arts. THOSE. Timkina is a laureate of the national prize in the field of contemporary fine arts «Russian Gallery - XXI century», laureate of the Kirov region prize for literature and art, laureate of the V.M. I am. Vasnetsovs of the Government of the Kirov region in the nomination «Vocation». Tatyana Evgenievna is a follower of the 19th century academic school of watercolor, created by Professor Pavel Chistyakov, who continued the tradition of the Italians' watercolor school. The artist creates a complex pictorial surface with the help of small fills of color in one layer, in the nude, in portraits he uses glazing. Clarity, harmony and sophistication - these are the components of Tatiana Timkina's watercolors. The artist's paintings attract with poetry, purity and transparency of colors. In still lifes - ancient weapons, musical instruments, bowls and fruits - the artist continues the tradition of the Dutch still life, bringing in them a romantic mood, admiration for the texture of objects, due to technical skill, achieving amazing effects. The models for Timkina's portraits were the best people of Vyatka - musicians Daria Meerkova, Vladimir Shaposhnikov and Gennady Semizorov, bard Yuri Litsarev, poet Alexandra Mochalova, artists Pyotr Vershigorov and Alexander Mochalov, art critics Anna Shakina and Natalya Klementyeva ...

Tatiana dressed them in exquisite costumes of ancient times (from the Middle Ages to the Renaissance and the Enlightenment), placed them in a romantic setting with inscriptions in Latin. This is no longer a portrait of a specific person, but a portrait-painting, that is, according to Tatiana, «the image of what is in a person, what he does not advertise, his secret strings» - and at the same time «the cleavage of the artist's soul». T. Timkina traveled a lot in Europe. She visited the Czech Republic, Poland, Holland, Belgium, Germany, France, Great Britain, Luxembourg, where she painted a lot from nature. Subsequently, these impressions resulted in the compositions «Early Music» (2008), «Magic Light» (2009), «Carnival» (2010). Of all the European countries she visited, Tatiana liked England more: there is left-hand traffic, as if in the Looking Glass. She illustrated «Alice in Wonderland» with the thought of «the wanderings of an unprotected soul». She worked in the firm «Art-contour», taught at the Kirov Art School, since 2000 - at the Kirov branch of the Russian University of Innovations. Since 1998, a member of the Ars Nova association and the Union of Artists. Member of the board of the Vyatka Union of Artists. Works - in the Museum of the Academy of Arts (St. Petersburg), the Central Naval Museum, Kirov Art Museum, in private collections in Europe and the United States. Addictions: Plato, Kierkegaard, esotericism (Melchizedek and his school), Hoffmann, Stephen Fry, Woodhouse, poetry of troubadours, minnesingers, vagantes, German and English poetry, Joseph Brodsky, Kampen, Van der Goes, Van der Weyden, Van Eyck, Boats , Memling, Turner, Friedrich, Beardsley, Delvaux, Dali, Bach, Buxtehude, Vivaldi, Duran Duran, Andrei Tarkovsky, Fellini, Fassbinder, Irish whiskey, Winston lightes.

Since 2010 T.E. Timkina takes part in editions of the biobibliographic series «Library named after A.I. Herzen. Famous Readers», having prepared several interesting texts for publication in them, and developed a graphic image of the facade of the old building for the cover as an emblem. With the consent of the author, the drawing is still often used in our advertising products. A feature of the covers of several books in this series are also reproductions of her watercolor portraits: «The Wind of Wanderings» (artist PS Vershigorov), «Portrait of the artist N.А. Zholobov» and «Musician» (V.Yu. Shaposhnikov). The artist paints his watercolor still lifes, portraits, landscapes in the manner of M. Fortuny - in small strokes, achieving amazing visual effects due to the high technique. Despite the fact that the master depicts specific people and real objects, their location and lighting makes the depicted scenes somewhat unreal, mysterious, similar to visions, I am sometimes told: «Throw the watercolor, and you will have everything in chocolate». But I will not betray her, watercolor allows you to draw very delicate things. Almost all great masters are European painters. I was brought up on the works of Rogier van der Weyden, Jan van Eyck, Hans Memling, Robert Kampen, Albrecht Dürer. They developed the structure of the painting and created the first art schools. The National Academy of Sciences and Arts was created by decree of Peter I, Germans and Italians were invited to teach there. When the Impressionists came, the teaching technique in Europe was lost. In our country, due to northern conservatism, the academic school has been preserved - therefore, Europeans are now inviting our artists to teach. Her work was also influenced by her love of literature.

The artist likes the works of Dickens, Shakespeare, Pushkin, Borges.

«The connection with literature and history fills me. In my works, I show the past, but I paint all the characters from my contemporaries. This is the tradition of Dutch painting: when artists created biblical subjects, they also used the faces of their contemporaries.» 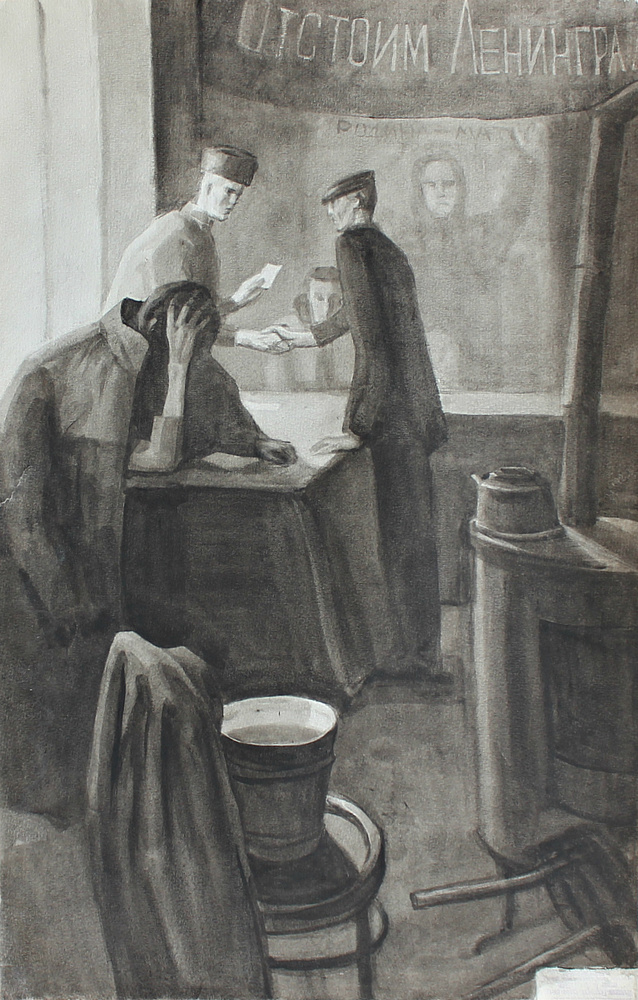 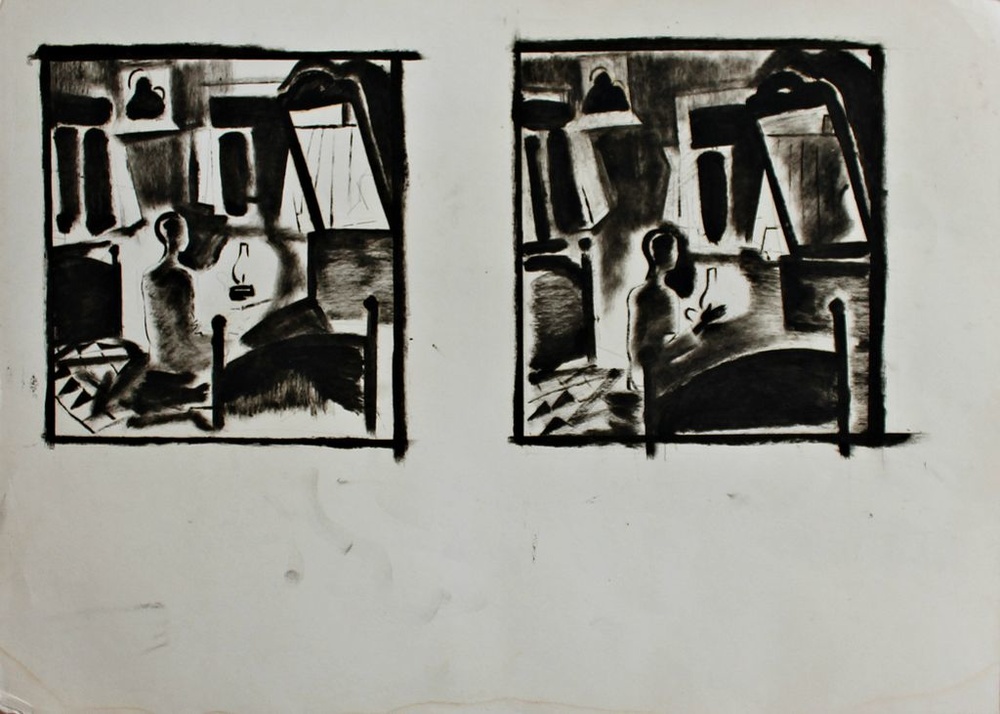 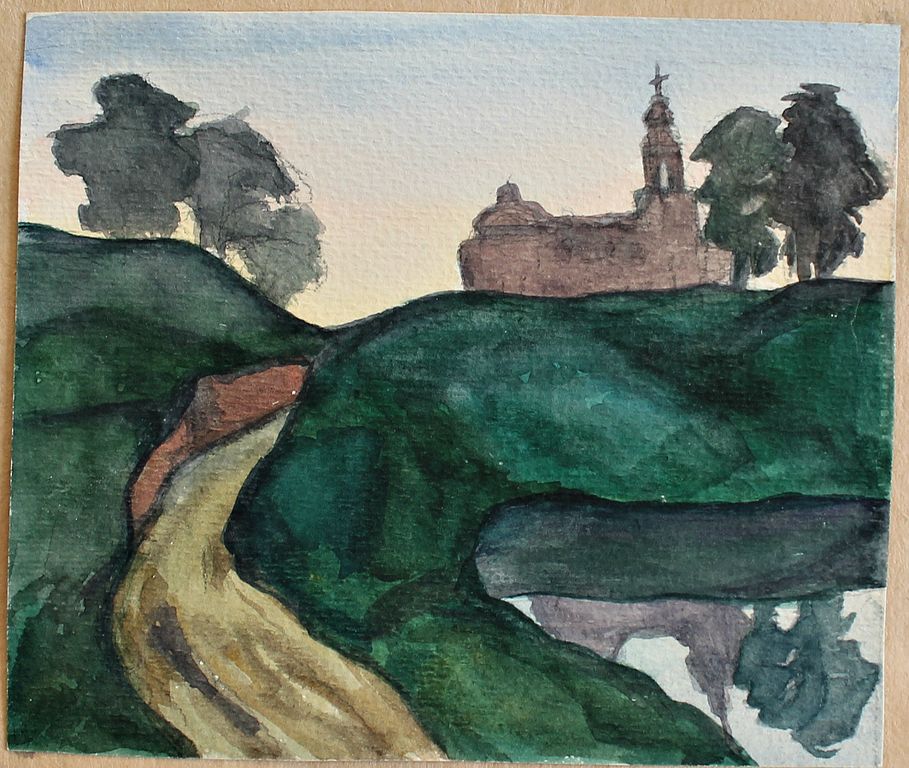 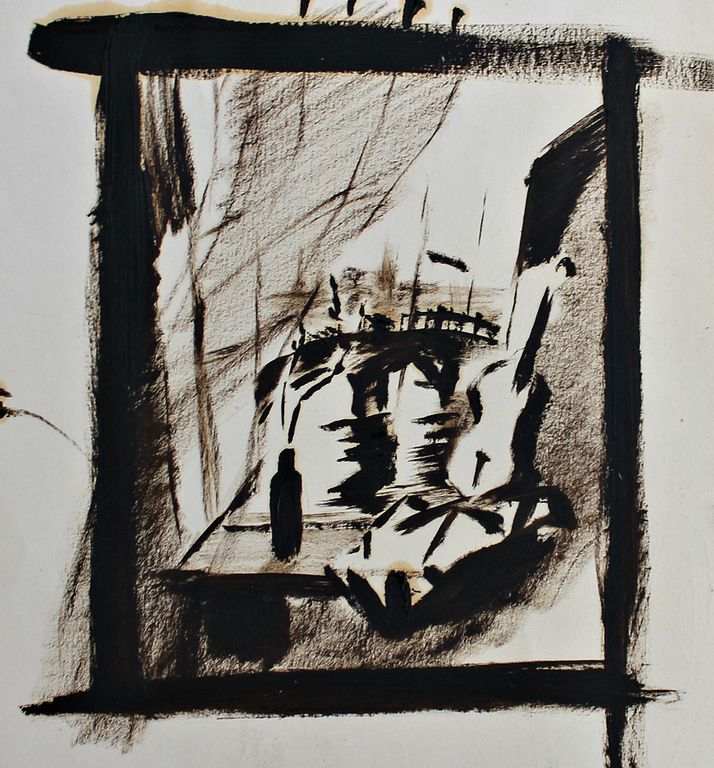 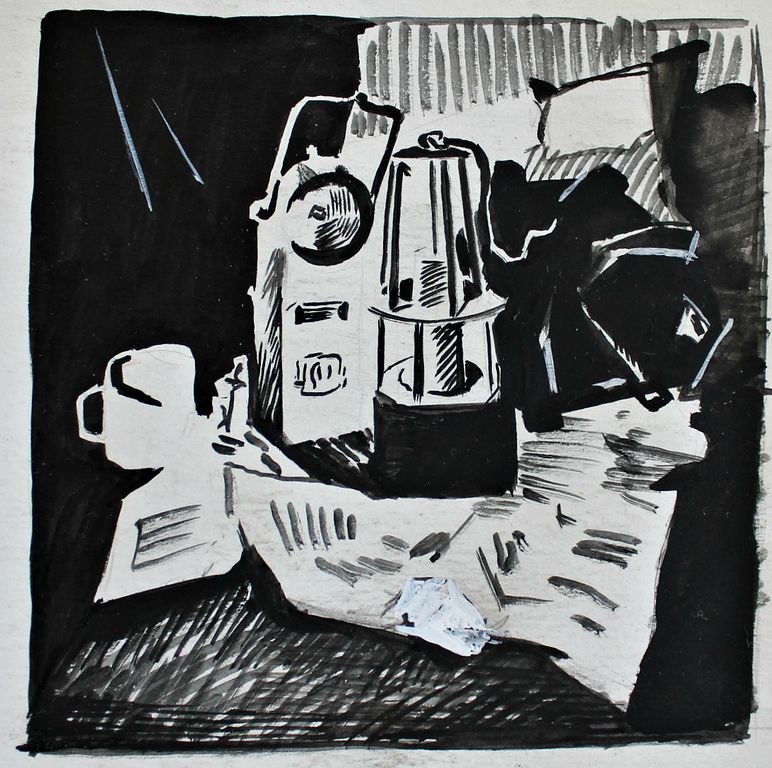 lot 159. «Illustrations for the book» 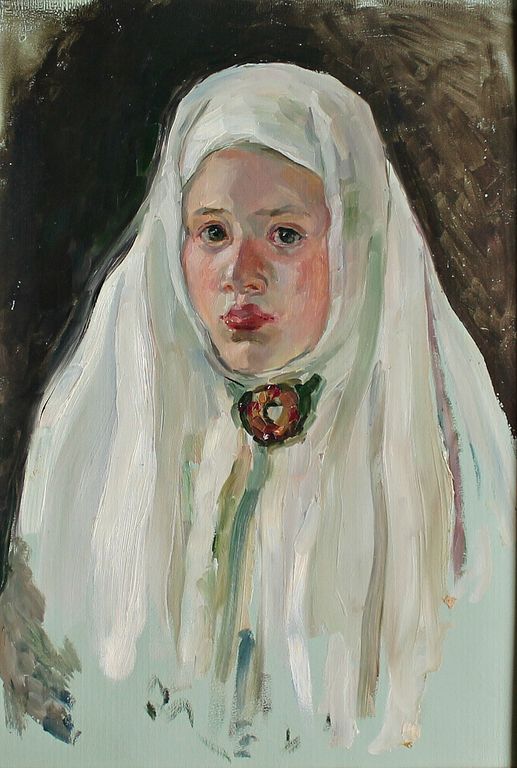 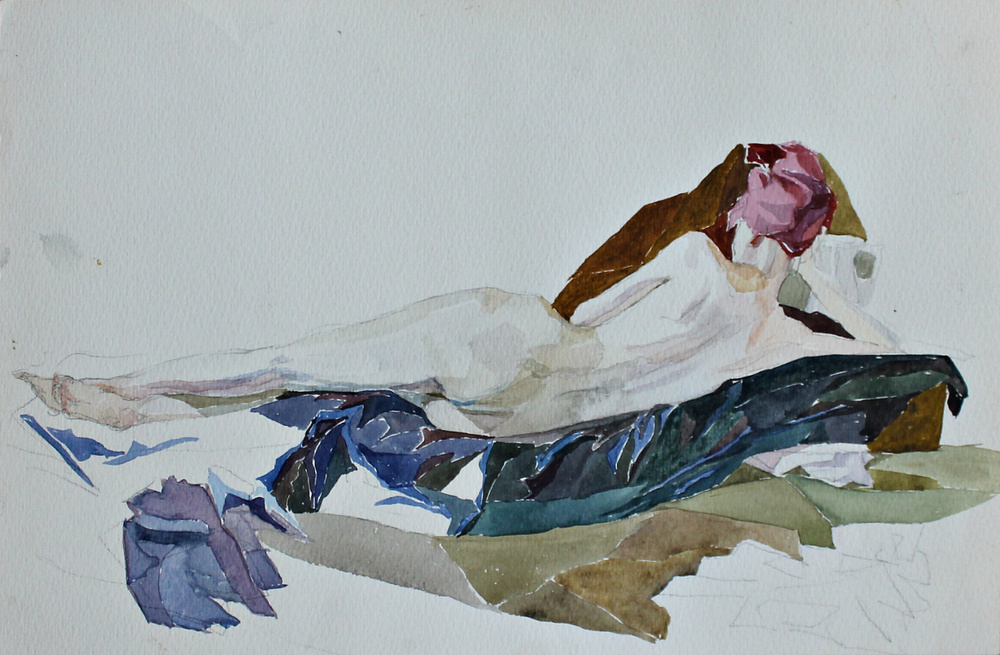 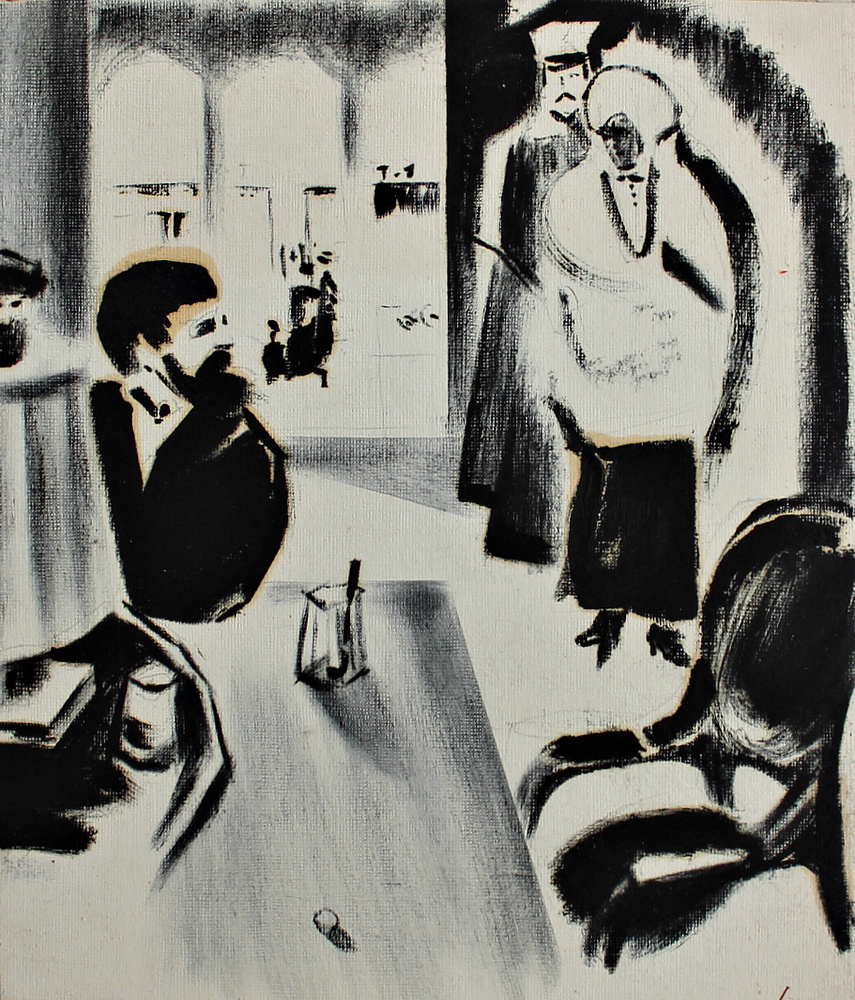 lot 131. «Illustrations for the book» 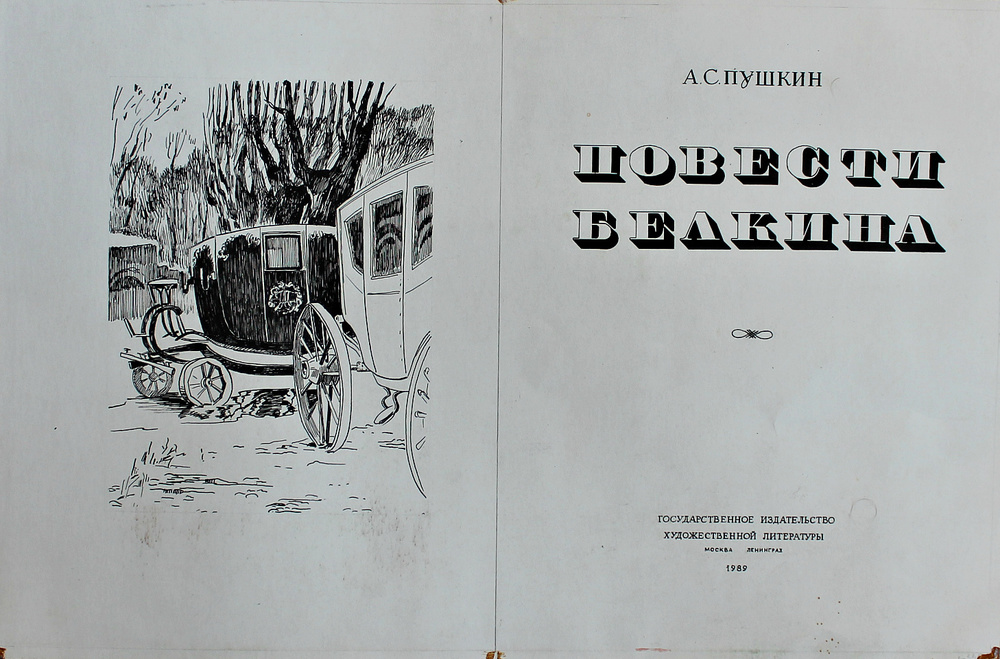 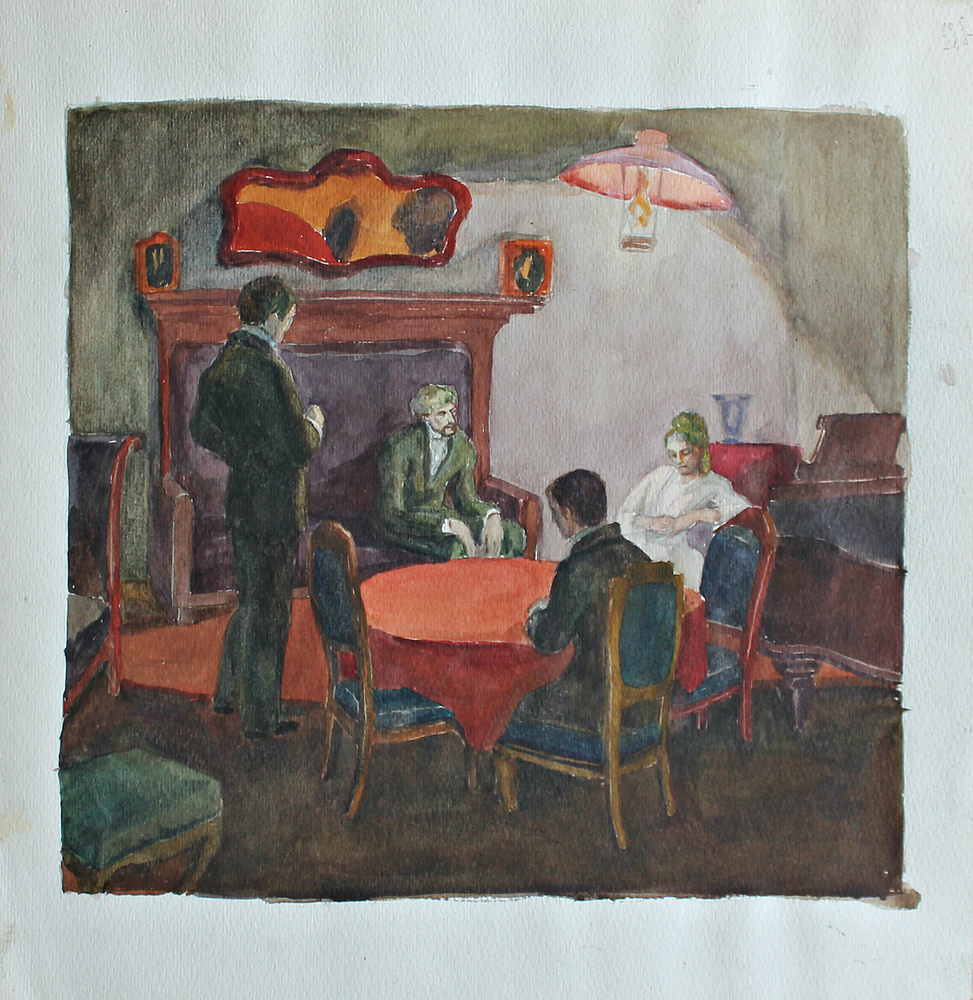