Mikhail Mikhailovich Gerasimov (born November 1, 1938, Leningrad) - Soviet and Russian graphic artist, teacher, professor at the Repin Institute, Honored Artist of the Russian Federation, member of the Union of Artists of Russia. Dean of the Faculty of Advanced Training for Teachers, Dean of the Faculty of Graphics, head of the personal workshop of easel graphics at the Repin St. Was born on November 1, 1938 in Leningrad.

Before the war, the family lived in Leningrad. From November 1941 to 1944 Mikhail was with his mother and sister in evacuation in Udmurtia, where, in fact, from the age of 3 he began to paint with extraordinary persistence and enthusiasm. From the evacuation they returned to Leningrad, to the former communal apartment on Herzen Street, 46. Thanks to the care of his mother, who was trying with all her might to develop her son's abilities, the young artist attends classes in the Fine Arts circle of the Oktyabrsky House of Pioneers and Schoolchildren on Moika, 122 (Palace of Grand Duke Alexei Alexandrovich) , and then in the Leningrad Palace of Pioneers named after A. A. Zhdanov (Anichkov Palace), where such famous teachers as E. V. Tikhomirova and S. D. Levin became the first teachers of Mikhail.

From the first to the fourth grades, Mikhail studied at secondary school No. 225, which was then located in the famous Myatlev House on St. Isaac's Square. On the recommendation of S. D. Levin, he was sent to receive an art education at the Leningrad Secondary Art School at the Repin Institute of Painting, Sculpture and Architecture. In 1950, Mikhail was admitted to the Leningrad Secondary Art School.

Teachers of general education subjects: A.F. Podlyasskaya (Russian language and literature), B.V. Fishman (geographer), P. S. Nikitin (physicist), A. I. Klyuchanov (chemist), E. S. Klyuhanova (mathematics ), N.I. Andretsov (school director), I.I. Andreev (head teacher for art). Art teachers: L. S. Sholokhov, V. N. Kitaygorodskaya, V. V. Lebedev, V. I. Senchukov, M. G. Kozell, and M. Ya. Perepyolkina (graduate of the workshop of B. V. Ioganson). She made a huge impact on all of her students. To instill in students «volumetric-spatial thinking» and to teach general looking - that was the main thing in her teaching methodology. She considered it equally important to master the general culture, in addition to acquiring professional skills. On her initiative, the Shadow Theater was created, and the efforts of senior and junior schoolchildren were staged by P. Ershov's fairy tale «The Little Humpbacked Horse» and a small reprise - «Schoolchildren of the Secondary Art School in practice in Jukki». For the production of «The Little Humpbacked Horse» Gerasimov M.M. was awarded the Diploma of the Laureate of the second festival of Leningrad youth in 1957.

Mikhail graduated from the Leningrad Secondary Art School in 1957 with a Gold Medal. Friends: Yaroslav Lavrentyev, Vladimir Pavlov, Sergey Trofimenkov, Vadim Kochubeev, Victor Petrov, Vladimir Bokhan, Valery Piskunov, Dmitry Fridlyand, Lev Baranov, Vladimir Dubrovsky, Gleb Raikov, Mikhail Gerasimov. Through the efforts of the mother, numerous children's and youthful drawings of the artist, watercolors and oil paintings have been preserved, testifying to his high talent. They vividly reflect the life of that time, are filled with lively feeling and mood.

Since 1966, the life and work of M.M. Gerasimov were closely associated with the institute, with its teaching staff, which included famous cultural and art workers of Leningrad. Among them are such outstanding masters as V.M. Oreshnikov, A. A. Mylnikov, E. E. Moiseenko, M. K. Anikushin, Yu. M. Neprintsev, B. S. Ugarov, M. M. Devyatov, famous art critics: I. A. Bartenev, A. L. Kaganovich, V. N. Batazhkova, S. V. Korovkevich, R. I. Vlasova, I. G. Romanycheva, V. I. Razdolskaya, N. S. Kuteinikova. Since 1967 - the head of the summer artistic production practices of students of the Institute in Russia and abroad: France, Poland, Hungary, Czechoslovakia. In 1970, at an exhibition dedicated to the 100th anniversary of the birth of V. I. Lenin, M. M. Gerasimov was admitted to the Union of Artists of Russia. The exposition featured four sheets (etching) from the «Divers7 series. 1970 to 1974 the series «Sport» and «Metallurgists of Chusovsky Metallurgical Plant» were created. A series of drawings and watercolors «Vera Slutskaya Factory».

From November 1974 to June 1975 he was in Italy as a «trainee of the Italian government». Upon his return, the artist made a reporting exhibition (over 70 drawings and watercolors) in the «Marble Hall» of the Leningrad Academy of Arts, which was highly appreciated by the Academic Council of the Institute, which aroused great interest of students and teachers.

From 1976 he was elected a member of the party bureau of the institute, from 1977 to 1979 the secretary of the party bureau. In the same years, trips took place to a creative dacha in Solnechnogorsk, as well as to the Academic dacha near Vyshny Volochk under the leadership of I.M.Penteshin, together with artists and art critics, where M.M. Gerasimov also performed a significant number of creative works. In 1982 he was awarded the title of Associate Professor.

As a well-known artist and experienced professional M.M. Gerasimov repeatedly fulfilled the duty of the Chairman of the State Attestation Commission (VAK) for the defense of diplomas in the universities of art and art schools of the USSR: Moscow (Moscow Art Institute named after V.I.Surikov), Leningrad (Leningrad Artistic Institute named after V.I. I. Mukhina), Krasnoturinsk, Yakutsk, Vladivostok, Yaroslavl, Tomsk, Saransk. He was elected to the bureau of the graphics section of two convocations, a delegate to the republican congresses of Russian artists, and was also a member of a group of artists who worked at creative bases in Senezh, Staraya Ladoga, an international group of artists led by D. B. Borovsky, invited to the open air in Krasnodar region. There, in the Kuban, M. M. Gerasimov created graphic series of portraits, landscapes, genre scenes, which aroused great audience interest. His works are in the gallery of the village of Privolnaya. In 1994 he was awarded the title of professor.

From 1988 to 2002, he combined teaching at the Faculty of Graphics with the duties of the Dean of the Faculty of Advanced Training for Teachers. In 1998, he was invited to South Korea to teach at the University of Daegu, where he successfully worked for two years, actively participating in exhibitions of teachers and students.

From 2002 to 2005 - Dean of the Faculty of Graphics and head of the personal workshop of easel graphics (until 2008). In 2008, he completely switched to creative work. Since 2012 she has been a member of the Polyrealism association and a permanent participant in the traditional exhibitions of this group. 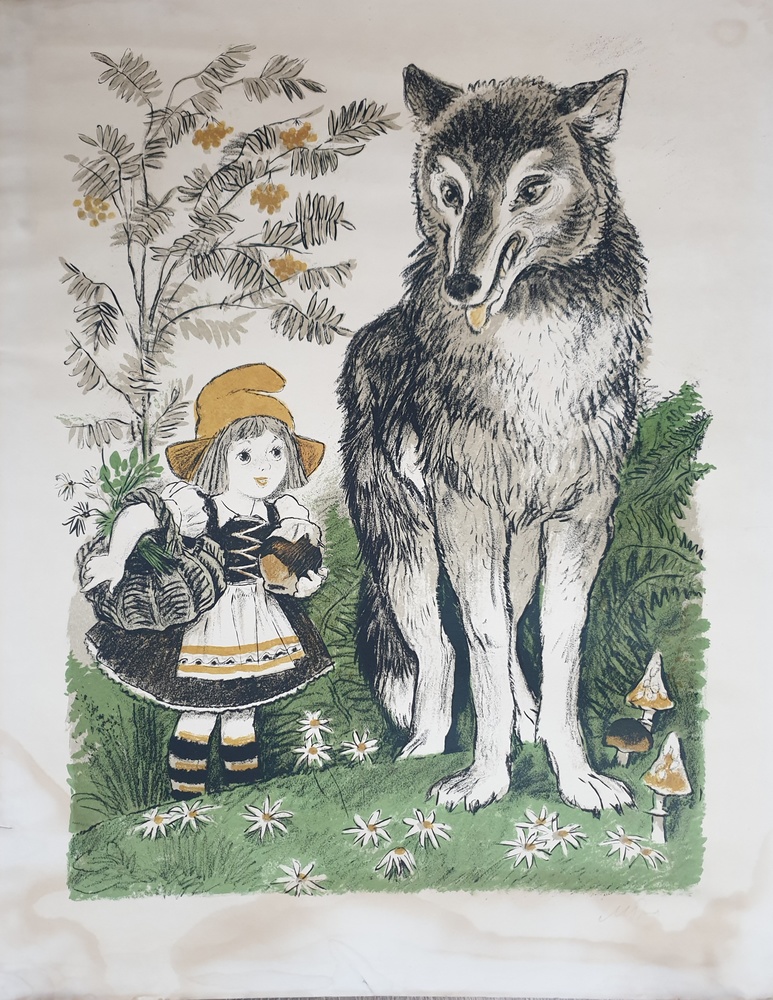 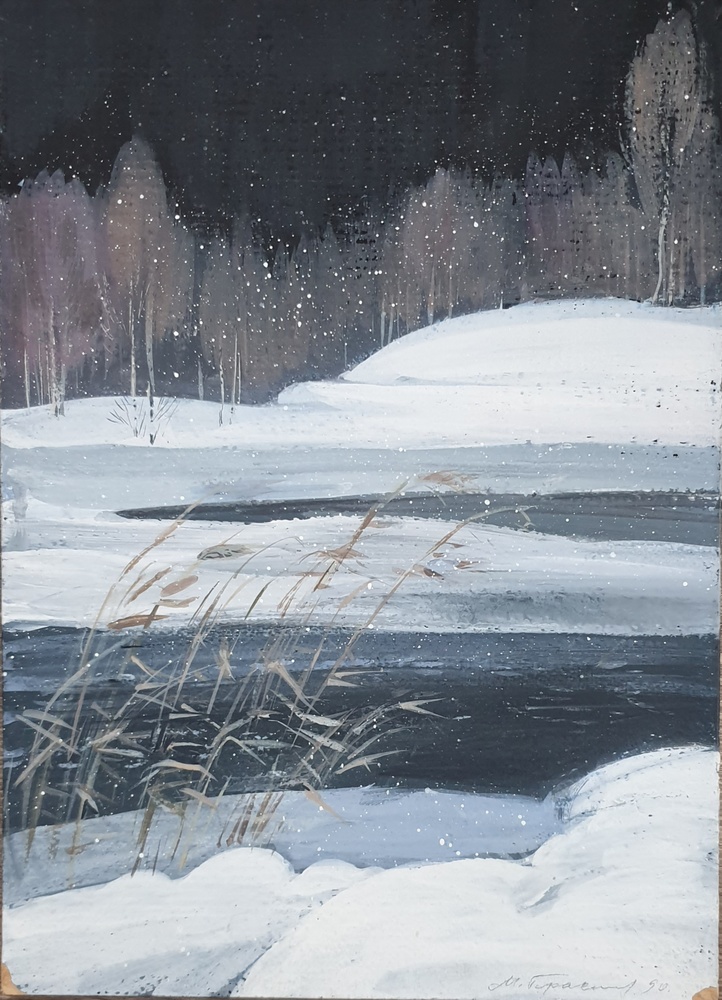