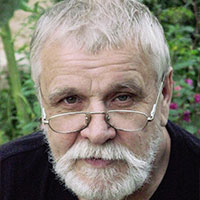 In 1967, Nikolai Ivanovich graduated from the Irkutsk Art School under the direction of M.D. Voronko. Illustrations for the «Tale of a military secret, about Malchish-Kibalchish and his firm word» by A.P. Gaidar were presented as his thesis. The author chose a new artistic solution - the cut applique technique, which allows creating laconic, strict stylized images. The number of colors used was limited: white sheet tone, dark black and excited red - in the images. This approach seemed to be quite consistent with the spirit of the time, since in the 1960s Soviet illustration was going through a new stage of development associated with the rejection of detailed narrative, with the awareness of the peculiarities of the language of book graphics, its conventionality and decorativeness.

At the same time he got married and a year later went to the Moscow region, where preparations were under way for the exhibition «Graphics of Siberia». In 1969 at the exhibition of the Union of Artists of the USSR appeared the first series of his works in printing technique - «The Decembrists». These works were performed using the «color autolithography» technique. One of the collections of works dedicated to the Decembrists is called «Out of the category» and is dedicated to the five hanged Decembrists. The series includes portraits of Sergei Muravyov-Apostol, Pyotr Kakhovsky, Mikhail Bestuzhev-Ryumin, Kondraty Ryleev, Pavel Pestel. An interesting technique in which these works were performed - «dry needle». Another block of graphic works is devoted to the Decembrist uprising. Nikolay Domashenko was one of the first to use color in his works.

In 1971 he was awarded the Iosif Utkin Prize of the Irkutsk Regional Committee of the Komsomol named after Iosif Utkin, awarded for creative merit. In 1973, Nikolai Ivanovich and his family moved to Novosibirsk, worked there, fulfilling individual creative orders. In 1983 Nikolai Ivanovich moved to Leningrad, worked in the Union of Artists, in an experimental workshop, in the children's art school «Alexandrino» as a teacher of drawing. In 1998, the artist, together with his fellow artists I. L. Chernov-Dyatkina, K. O. Pochtennaya, A. A. Gavrichkov and others, organized the creative group «10 Quiet». This group is characterized by the desire to avoid noisy PR campaigns, vanity, and the commercialization of the artist's labor. The group's motto is the Latin dictum «Ab ovo». Exhibitions: 1998 - «Ten Quiet» (Museum of Urban Sculpture); 1999 - «10+» (exhibition hall «Nevograf»); 2000 - «Quiet Music» (State Academic Capella); 2001 - «Walks to Pushkin» (All-Russian Museum of A. Pushkin; in addition to the works of the group members, the works of L. Sergeeva were posthumously exhibited). N.I.Domashenko has been a member of the Union of Artists since 1971. From 1988 to 1996 he was a member of the association of artists of printed graphics named after. N. A. Tyrsy.

Ex-librises constitute a separate facet of N.I.Domashenko's work. These miniatures are the most popular ex-librises in the 20th century. Their main feature is a drawing that laconically and figuratively reflects the interests, profession of the owner of the library or its composition. The author turns to different techniques for the best embodiment of his idea: this is drypoint, etching, incisal engraving, and boron engraving; often they are finalized with watercolors, which add completeness and colorful uniqueness to the prints. Sometimes the range of colors is based on the harmony of contiguous or complementary colors, sometimes it is limited by the tint, which is sparse in terms of the number of shades and brightness. Nikolay Domashenko is a permanent participant of the All-Russian Ex-libris Congress.

Works in easel and book graphics in various techniques: etching, incisor engraving, drypoint, lithography. Major works: «The Decembrists» (1969), «Tragedies of December» (1973), «Bread of Siberia» (1979), illustrative design of the works of N. V. Gogol - «Viy», «The Missing Letter», «The Night Before Christmas» (1971 —1997), Petersburg Tales (2002), The Stone Guest by A. Pushkin (1999), Ugly Swans by the Strugatsky brothers (2000) and The Tale of Khoja Nasreddin by Leonid Solovyov (2005). The engravings of N. Domashenko are characterized by romantic elation, perfection of form, sophistication of drawing.

Since 2009 Nikolay Domashenko has been collaborating with the editorial board of the Irkutsk children's literary and art magazine «Sibiryachok» - he is leading the column «To the 200th Anniversary of the Patriotic War of 1812». In October 2016, the Novosibirsk State Art Museum hosted an exhibition of works by Nikolai Ivanovich Domashenko, dedicated to his 70th birthday. Named «The Artist and the Museum», it represented both the work of the author himself and his role as a collector and donor. Nikolai Ivanovich's works are also kept in the State Hermitage Museum. 2 sheets: «The Face of the Founder» and «The Guards Carriage on Senate Square on December 14, 1825» are in the Hermitage collection as part of the album «Petersburg - the Sea Capital of Russia». 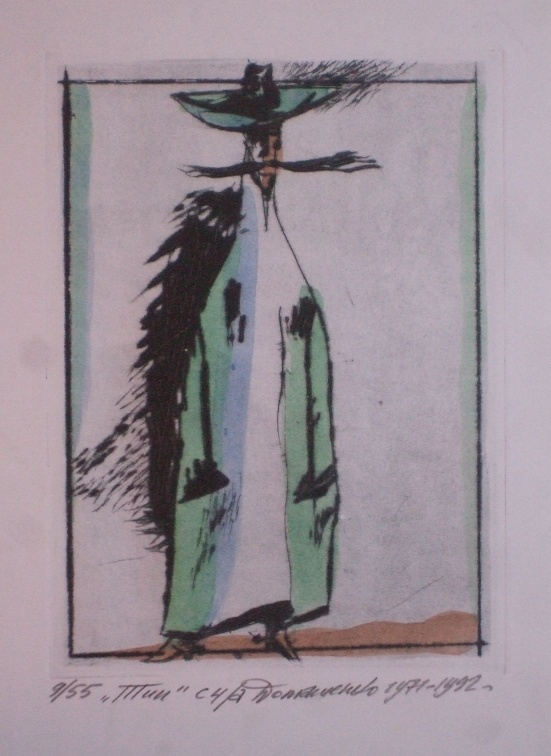 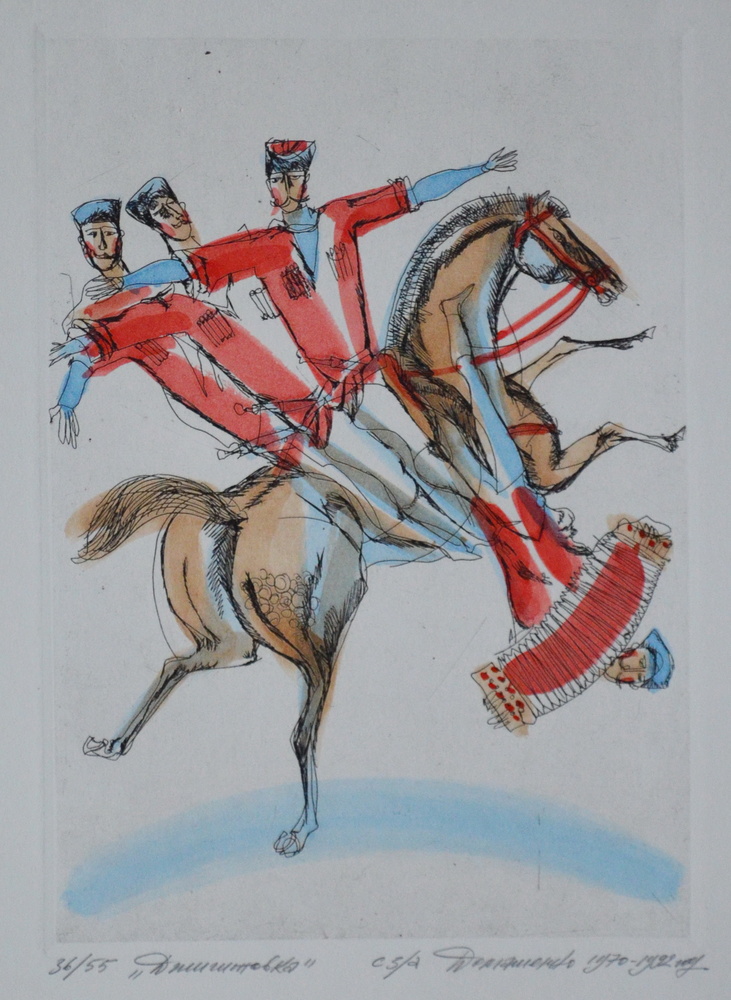 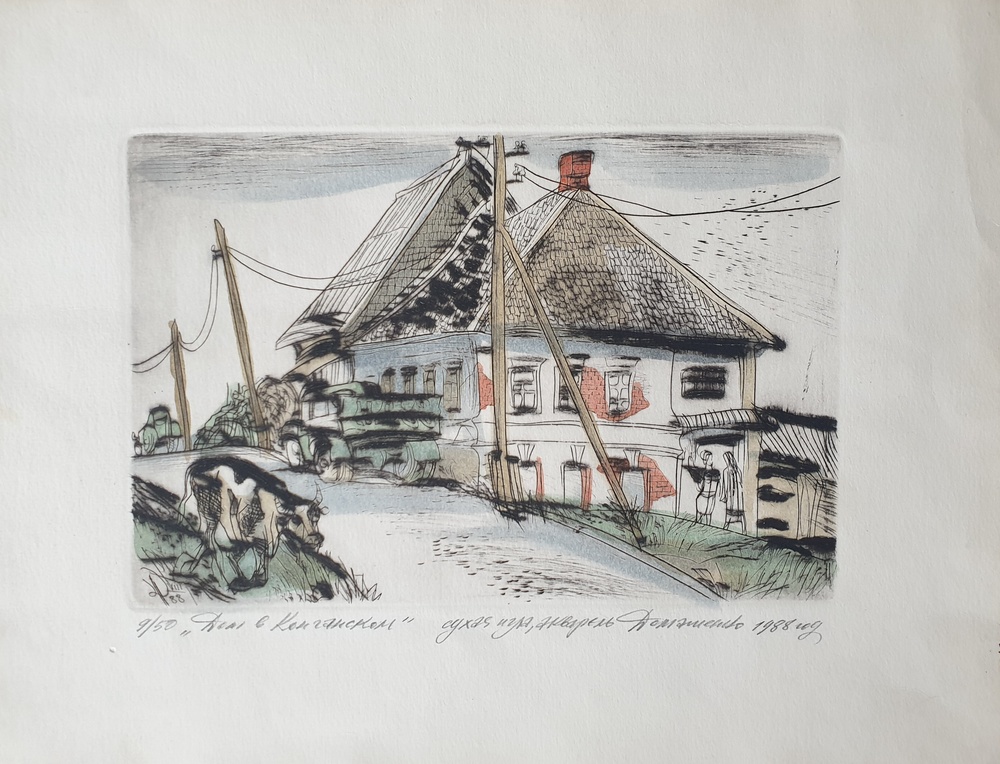